[espace variable | placeholder], the first digital publication by La Centrale galerie Powerhouse, turns its attention toward the possibilities of navigating and engaging with third places, and (re)telling stories of place and place-making by and for communities that are marginalized by white supremacy culture. 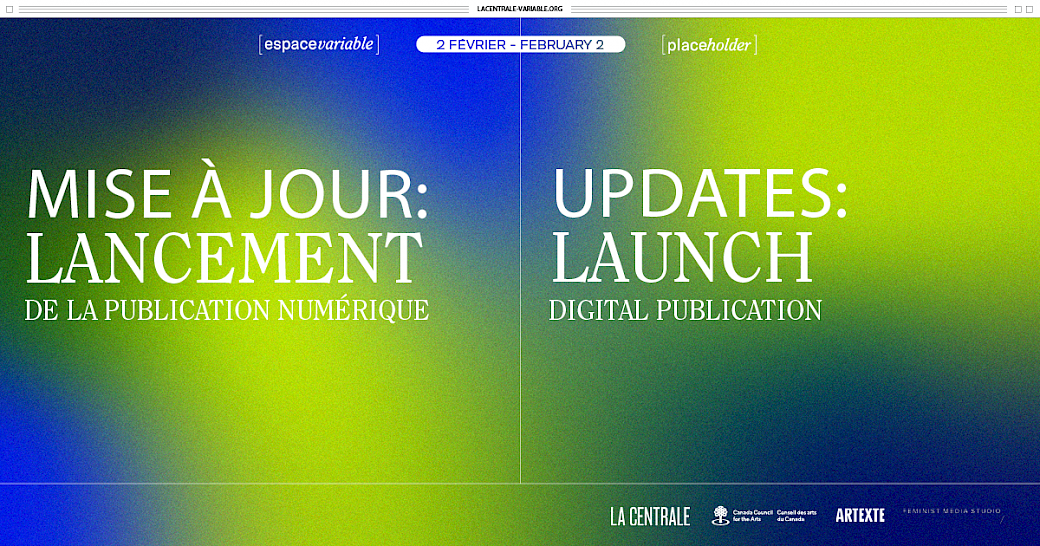 We are excited to inform you of the new launch date of the digital publication! As the project grows in scope, [espace variable | placeholder], will be launched on February 2nd, 2023 rather than in December as previously announced. A launch event, an exhibition and a discussion at La Centrale will highlight this launch!

The Byte-sized Sound Creation residency featuring artist-in-residence rudi aker took place from September 12th to November 4th, 2022 in partnership with Feminist Media Studio. As a continuation of their ongoing research-creation project, the work a bird in the hand is a sonic exploration of memory, transmission, and reciprocity. An audio poem resulting from this research-creation will be published in [espace variable | placeholder] in February.

We’re thrilled to announce a partnership with Artexte, a library, research centre and exhibition space for contemporary art. As part of [espace variable | placeholder], the Artexte Visual Index, revisits catalogues and texts informed by third place theory, hacker feminism and digital fandom communities. Developed by La Centrale, the Artexte Visual Index will be presented in the digital publication and will be available for public viewing at the [espace variable | placeholder] IRL exhibition, which will take place from February 2nd to 23rd, 2023 at La Centrale.