La Centrale is pleased to welcome India-Lynn Upshaw-Ruffner and Lital Khaikin to the team. Between February 2022 - February 2023, India-Lynn and Lital will be developing a digital publication, launching in December 2022, as part of the Digital Now initiative by the Canada Council for the Arts. 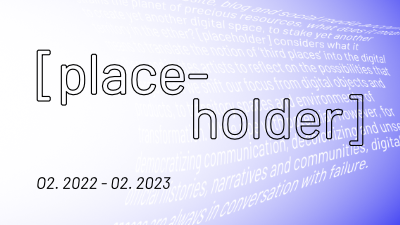 When every new website, blog and social media account strains the planet of precious resources, what does it mean to create yet another digital space, to stake yet another territory in the ether? [placeholder] considers what it means to translate the notion of ‘third places’ into the digital sphere, and invites artists to reflect on the possibilities that emerge when we shift our focus from digital objects and products, to transitory spaces and environments of transformation.

As extensions of our planetary ecosystems, vitally connected to organic and geologic networks of resources, digital spaces are always in tension with the instruments of nation-states. From digital passports and geoblocking, to Tor networks and the darknet, digital spaces challenge our understanding of what it means to reclaim or stake sovereignty on the Internet, while opening possibilities for space that is transparent and impactful. Increasingly, apps and websites have intervened into geolocations by reclaiming and recovering Indigenous, BIPOC and queer histories in ways that layer and sediment over colonial narratives, proposing new encounters between sites and their meanings.

While ripe with potential, however, for democratizing communication, decolonizing and unsettling official histories, narratives and communities, digital spaces are always in conversation with failure. Even the best-intentioned projects are built on the physical and institutional infrastructures of colonial violence and settler states, recreating another form of what Homi K. Bhabha described in The Location of Culture as "unequal and uneven forces of cultural representation." [placeholder] turns its attention toward the possibilities of navigating and (re)telling stories of place and place-making, by and for communities that are marginalized by white supremacy culture and are here to stay in a digital world.

A call for submission for text contributions for the digital magazine, will be announced in June 2022. There will also be a sound-creation residency artist hosted by La Centrale as part of the project, the residency happening throughout the summer and early fall 2022.

India-Lynn Upshaw-Ruffner (Artistic and community alliances coordinator) is a Black bi-racial visual artist, writer, and curator based in Tiohtià:ke/Montreal, Canada, studying Art History and Studio Arts at Concordia University. Most recently, she has been selected to be a facilitator (curator) for the 2022 Art Matters Festival, has had her artwork shown in PDSA x Galerie Atelier 2112's group exhibition "Mask", and in InARTE Journal's 11th issue "Interaction". She has also written for the Undergraduate Student Exhibition Journal (USE) 2021 at the FOFA Gallery. More information.

Lital Khaikin (Publications and communications coordinator) is a writer based in Tiohtiá:ke / Montréal. Her journalism has appeared in Canadian Dimension, Toward Freedom, Warscapes, and elsewhere, with literary writing appearing in publications like 3:AM Magazine, Berfrois, Tripwire, and Black Sun Lit. She has collaborated with the continent. publishing collective since 2015, and occasionally publishes free chapbooks and leaflets through The Green Violin. More information.

This project is made possible by the Canada Council for the Arts’ Digital Now grant.