A Line is a vitrine installation by Leisure (Meredith Carruthers & Susannah Wesley). The short video and take-away poster is inspired by Brazilian artist Lygia Clark’s propositional action, Caminhando (Walking), 1963. A Line is part of Carruthers’ and Wesley’s ongoing investigation of collaborative process. Other works in this series include Folie à deux, 2009, on the evolution of a shared image library, and A shared puff, 2012, on the ephemeral nature of shared ideasù

A Line, at once an art and curatorial project, was commissioned for Out of Line, a multi-venue series of curated presentations focused on experimental drawing practices. Other projects being presented in early winter 2013 include Oil Stains (Dave Eppley) at galerie Oboro (curator Rachel Lafo) and Two Corners (Monika Gryzmala) at Arsenal (curator Renee Baert). Forthcoming projects include Two Vitrines by artist-curator Micah Lexier at the Belgo Building and a drawing installation-performance by Mumbai artist Nikhil Chopra.

Out of Line is produced by CARGO: Curatorial Group and developed by curator Renee Baert in collaboration with invited curators and participating venues.

Leisure (Meredith Carruthers and Susannah Wesley) is a conceptual collaborative art practice that explores the intersection between imaginary narrative and socio-historical research. Leisure frequently uses the strategy of curating contemporary art exhibitions and events, publications, conversation and the making of art works, to create a productive space for leaps of the imagination and understanding. Leisure has produced exhibitions and special projects in collaboration with venues in Canada and abroad, and has participated in residencies in Banff, Dawson City, Haliburton and Vienna.

Susannah Wesley is an artist and curator living in Montréal. She curated Making It Work at the Leonard & Bina Ellen Gallery, Montréal (2009) and was formerly the Director of Battat Contemporary, Montréal (2008-2011). She holds an MFA from the Glasgow School of Art (2002) and an MA in Art History from Concordia University, Montréal (2008).

Meredith Carruthers is an artist and curator living in Montréal. Her recent curatorial projects include Parade, a choreographed collection display at the Leonard and Bina Ellen Gallery, Montréal (2011) and the mSm exhibition with Italian artist Andrea Sala at the Guido Molinari Foundation (2011). From 2008-2011, she was part of the curatorial team at the Canadian Centre for Architecture. She holds an MFA from Concordia University, Montréal (2004).

Two pairs of scissors cut a strip of paper. Both slice along an invisible line through the paper surface. Snip, snip, snip.

One pair of scissors is rusted and the screw connecting its two blades has been tightened too tightly. The other is new and orange handled, of the inexpensive variety available everywhere. The paper is a lightweight bond roll. Snip, snip, snip. The cutters bring an intensity and focus to their task. They seem determined to find this invisible line.

Approaching the centre of the paper strip, a negotiation arises. Will the scissors meet? Will the line end with a common snip; two halves of the paper falling to the floor? The cutters veer slightly. The paths diverge. Each, together, apart, follow their elusive line.
A double folded Möbius, the paper strip has irregular properties. If we imagine the neighbouring surfaces of the Möbius as labelled A and B, both cutters are pursing their desired lines across surface A.

As the cutters pass to surface B, things are a little more complicated; the desired lines pass through the middle of previously cut strips. In forward progression each cut line is increasingly entangled in its own previously cut tails and those cut by the other.

It is no longer clear who is cutting surface A, and who is cutting surface B. Each strip, cut through the middle, is cut through the middle again. A tangled mass spills below the cutters.
An original point of entry interrupts one line. As quickly as it was born, one invisible line disappears. The second line continues on, buried. Both cutters, tuned to one effort, negotiate the tangled body of paper hoping to uncover the end of the final line. 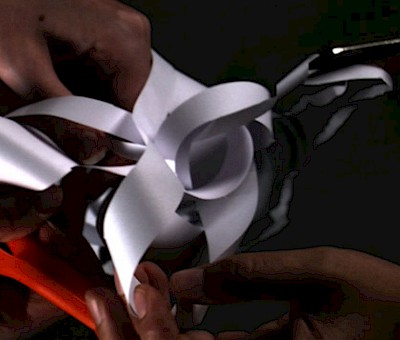