Inspired by workshops offered by La Centrale’s Educational Committee, this spring members will gather in the gallery, and transform it into a shared studio space dedicated to collective art-making. In keeping with the Centre’s mandate, this project highlights processes of creation in dialogue with feminisms and collaborative, transdisciplinary and non-hierarchical practices.

Multiple educational activities will be organized for the public, including visits to artists' studios, on May 13, from 1pm to 5pm: a feminist afternoon where 9 women artist-members of La Centrale will be receiving (a maximum of) 40 women, members of community organizations and feminist allies from the Montreal area.

LAURENCE BEAUDOIN-MORIN & MORGANE DUCHÊNE RAMSAY:
Morgane and Laurence will elaborate unproductive proposals, social constructions, assemblies and gestures by inserting themselves in the meshes of the objects of fabrics. They reflect on textile work and its utilitarian production, its domestic use or its status as a work of art through the performative activation of these objects. M and L will explore the (im) possibilities of a medium charged with the history of women from observing how objects are defined by the context in which they exist. They will produce documentation in the form of instruction sheets during the experiment, and then participants will be invited to take part in this common questioning during a performance evening inspired by the concept of improvisation sessions.

CAROLINE BOILEAU & NICOLE PANNETON
MANGEUSES AFFAMÉES foretaste – taste – tasting - distaste – after-taste:
Les mangeuses affamées is an in-situ performance project that questions our relationship to food, to the policy of its preparation, to the rituals that organize it, to the possible concoctions between the actions of poisoning, relieving and sustaining.
The terms foretaste, taste, tasting, distaste, after-taste that organize and give form to this project represent an attitude both artistic and political. When there is nothing to get its tooth unto, can one sustain itself only by performing the meal, imagining the feast, invoking the soup? Real soups shared with passers-by, but also stinking and indigestible witches’ broths, offered as metaphors of our troubled relationship to food; its preparation, its want or its excess; to the bodies that invent it, prepare it and ingest it. 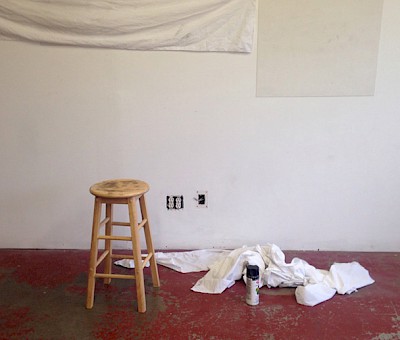