How far can we see within?

La Centrale galerie Powerhouse is proud to present the exhibition How far can we see within? from September 8 to November 3, 2022. This exhibition, curated by An Laurence 安媛, features the work of Corinne Beaumier, 童宙 Tong Zhou Lafrance and An Laurence 安媛. La Centrale galerie Powerhouse will host several activities in conjunction with the exhibition*: the performance "Birth of Home" by 童宙 Tong Zhou Lafrance which will happen at the opening on September 8 at 6:30 p.m., and a discussion with the artists titled “Uprooting and Reconciling: Unpacking Identity as an Asian Adoptee” which will take place on Thursday, October 6 at 6 p.m.

How far can we see within? brings together the works of three Chinese-Quebec artists who explore their identity as transracial adoptees and respond to feelings of confusion, grief, nostalgia, and frustration. Stemming from shared concerns, the works echo each other, inviting the public to enter into a contemporary dialogue about identity. Considering that in 2018 Quebec had 20,000 internationally adopted persons, the exhibition is part of a reflection on memory and belonging that deserves a greater place in the public sphere.

Within this context, Corinne Beaumier's works evoke the traceability of information through time, both what is lost and gained. The artist subtracts certain visual information from her archival documents using manual or digital techniques to symbolize the loss of information inherent in the journey of transracial adoptees. In the series “Le fond et la forme”, Corinne Beaumier uses the technique of paper-cutting, one of China’s oldest traditional handicrafts, to create voids on photographs of her adoption, symbolizing the acceptance of loss in the reconstruction of her own history. In “Conversation”, two videos depicting the artist are layered in an attempt to communicate with the past.

Also interested in the manipulation of archives, 童宙 Tong Zhou Lafrance examines the reconstruction of cross-cultural heritage, the intersection between the glorious and the mundane, and the migratory nature of the sense of belonging. In the works, “From China, To Canada” and “Untitled Labour”, 童宙 Tong Zhou Lafrance cuts and reweaves their own photographic memories by manually recreating the industrial weaving method used to manufacture Chinese calendars. The textile and performative work “Birth of Home” allowed the artist to symbolically bring their own house into the world.

“Come Closer, I’ll tell you what I forgot”, a performance by An Laurence 安媛 presented for this exhibition in the form of an installation, is a narrative work embodying a collective memory specific to Chinese adoptees during the implementation of family planning policy. Based on extensive research, this project imagines the different trajectories that led adoptees from their native China to the international adoption system. With this work, An Laurence 安媛 seeks to solubilize her current identity with her forgotten experiences.

An Laurence 安媛: An Laurence 安媛 is a multimedia artist based in Tiohtià:ke/Mooniyang/Montreal whose works address memory and transnational identity. Her works have been presented by Accès Asie, MUP, Chinatown Biennial, Flourish Fest, Gham&Dafe, Tranås at the Fringe and others. She has been an artist in residence for Oboro and Vidéographe. An Laurence is also a musician whose debut solo album “Almost Touching” was released in May 2022 on people | places | records. More d’information : http://an-laurence.ca/

Corinne Beaumier: Through photography and video, Corinne Beaumier reflects on lived or staged experiences. Reworked archival images, improbable scenes, troubled emotions, or strange humour, her practice borrows from the tragicomic tone that characterizes her vision of the world. She completed a BFA from Concordia University in Montreal in 2015, held her first solo exhibition in 2014, and has since been involved in group exhibitions, curatorial, and film projects.

童宙 Tong Zhou Lafrance: 童宙 Tong Zhou Lafrance is a multidisciplinary artist living in Tiohtià:ke/Mooniyang/Montreal. Their visual research explores different ways of reuniting their past with their everyday life through the alteration of family archives and travel souvenirs. Their work has been presented at the Whippersnapper Gallery, Rad Hourani Foundation Gallery, and Eastern Bloc, among others. In 2022, they co-founded the Soft Gong collective, the first francophone organization for and by adoptees from China. More d’information : https://tongzhoulafrance.com/ 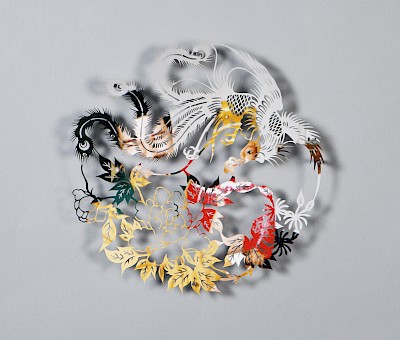