Off-site Research Projects January to May, 2014

Research project presentations will be held on November 27th and December 12th, 2014

As part of La Centrale's special 40th Anniversary Programming, artists have proposed a series of research residencies that reanimate the archives in various forms. These residencies respond to the centrale question of our 40th activities in that they reflect on the impact on historical feminist strategies on contemporary practice. In these projects artists are exploring archival materials, the concept and limits of the archive as well as notions of history and its authority.

Anne-Marie Proulx is an artist, author, and curator who lives in Montréal, Quebec. Her work often bridges writing and art creating stories in which there is space for the memories and imaginations of others. She holds a Master’s degree in Art History from Concordia University, where she also completed a Bachelor’s degree in Visual Arts that was started at NSCAD University in Halifax.

Anne Golden is an independent curator and writer whose programs have been presented at Musée National du Québec, Edges Festival and Queer City Cinema among others. She has written for FUSE and Canadian Theatre Review. Golden has participated in numerous panels on curatorial practices, independent distribution and, more recently, horror films. Golden is Artistic Director of Groupe Intervention Vidéo (GIV). She teaches in the Creative Arts Department of John Abbott College. Golden has made fifteen videos including Fat Chance (1994), Big Girls Town (1998), From the Archives of Vidéo Populaire (2007) and The Shack (2013).

k.g. Guttman is currently a research candidate in the PhDArts program of Leiden University and the Roal Acdemy for Art in the Hague, the Netherlands. Her research, funded through the Social Sciences and Humanities Research Council (SSHRC), considers the dérive as method for research, observation and performance. From 2008-2013, k.g. Guttman was an Assistant Professor in the Department of Contemporary Dance at Concordia Unversity, Montreal . 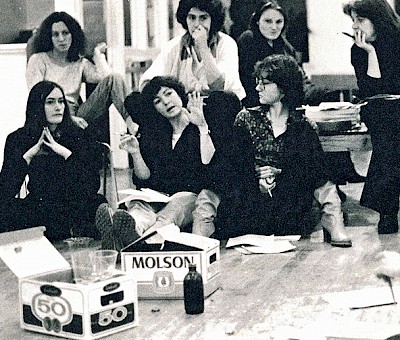