As part of International Women's Day

Event monday, march 8, 5 to 8pm
A dinner will be offered by La Centrale

On the occasion of International Women's Day, La Centrale is happy to present a screening and discussion night on the movies of filmmaker Carole Roussopoulos, who passed away in 2009.

The screening will be introduced and followed by a discussion hosted by filmmaker Lise Bonenfant (Quebec), who, with Carole Roussopoulos, was part of a Quebec/France retrospective at the Festival International des films de femmes de Créteil. Through the vision of these two feminist directors, who have both given a voice to those who do not have one, we will discuss the seminal role that women have played in the engaging, inventive and humorous use of video.

CAROLE ROUSSOPOULOS
Born May 25, 1945 in Lausanne, Carole Roussopoulos spent her childhood at Sion and lived in Paris after 1967. Two years later, after leaving her position at Vogue magazine, following the advice of a friend the writer Jean Genet, she purchased one of the very first video cameras ever available in France, the famous Sony “Portapack”. With her companion Paul Roussopoulos, she set up the first collective of video militants, baptized “Video Out,” from there on insisting to give the word to those “sans-voix” (without a voice), the oppressed and the omitted: “Portable video made it possible for us to give the word to those directly concerned, those who were not obliged to pass through the grinder of journalists and media, those who could create their own information.” Carole Roussopoulos created and edited more than a hundred and twenty documentaries, all from the the humanist and feminist perspective, moved by the constant will “to make it understood that it is with great pleasure and enjoyment that we fight. We only have but to gain by lifting our heads, everyone, all those oppressed on earth.”

LISE BONENFANT
Born 1947 in Abitibi, Quebec, Lise Bonenfant belongs to a generation of women who feel the urgent need to express themselves, using words and images to do so. Independent film-maker for 33 years, her legacy is written in nearly 60 films, mostly documentaries.
For the length of her career she has devoted herself to approaching difficult subjects by giving the word to those who are less likely heard in the discussion and support of women’s development.

Y'a qu'à pas baiser
1971, 25 min, in french
This documentary about abortion was made when it was still illegal in France. It looks at why women decide not to keep their child and how an abortion is carried out according to the Kaman method. The film also shows the first women’s demonstration in favor of abortion held on 20 November 1971.

DEBOUT ! A history of the movement of women’s liberation 1970-1980
1999, 90 min, 1999, in french
Using numerous archives (sound,photographic and audiovisual), the film is a tribute to the women who created and carried the women’s liberation movement in France and Switzerland, praising their intelligence, their audacity and their humor. It is presented as a bridge between the pioneers and the new generations. 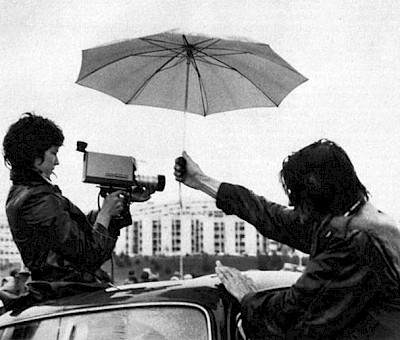