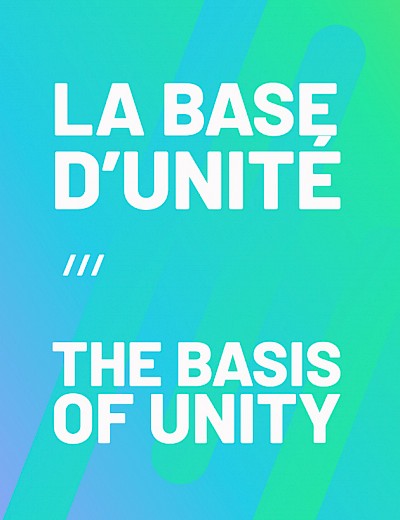 Voted on July 22, 2020 during the Summer EGM
Prepared in June, 2019 by the Equity Officer, Yen-Chao Lin
Revised on February 8th, 2020 during the Equity General Assembly
Reviewed on June 25th, 2020 by the La Centrale staff
Translated from French to English on July 2nd, 2020 by Camille Paquin and proofread by Mattia Zylak on September 21st, 2020.

The basis of unity

First, La Centrale recognizes that it is located and operates in Tiohtià:ke/ Montreal, the unceded Indigenous territory of the Kanien'kehá: ka (Mohawk) nation.

The Basis of Unity was created to support the mandate and mission of La Centrale Galerie Powerhouse: to create an inclusive space for the dissemination of multidisciplinary artistic practices while acting in dialogue with feminisms and supporting intersectionality and social justice. The Basis of Unity is an adaptable tool and resource. It is constantly evolving, just like La Centrale.

The Basis of Unity outlines La Centrale’s founding principles and is developed in collaboration with the gallery’s members, employees, and Board of Directors. This document applies to everyone involved in the organization (included but not limited to: artists, tenants, partners, participants in special projects, and contractual collaborators). In the collaborative spirit, continued criticism and feedback from members and employees is essential for the continued development and improvement of the preventative approaches and values of La Centrale Galerie Powerhouse.

La Centrale Galerie Powerhouse has created the Basis of Unity with the intention of being transparent towards its community. As a public-facing document, The Basis of Unity is meant to ensure that everyone who is involved either directly or indirectly with La Centrale is aware of and respects the organization’s founding values. The Basis of Unity is a working document, continuously evolving according to the criticism and input of our community. La Centrale continues to rethink its structure, organizational practices, and programming in order to fully realize its anti-racist, anti-oppressive, and decolonial mandate and values.

The basis of unity in PDF version