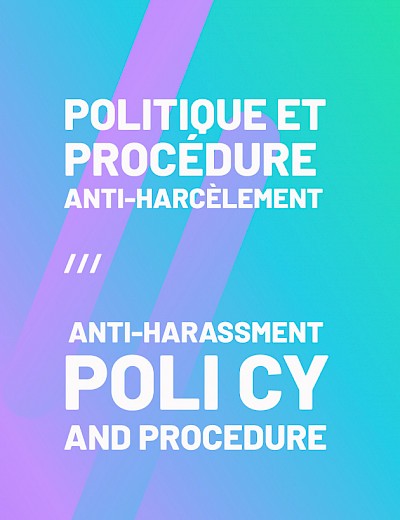 Effective from: July 22th, 2020
Adopted by: The Board of Directors of La Centrale galerie Powerhouse and the members present during the General Assembly of July 22th, 2020
Contact person for the implementation of the policy: For any inquiries regarding this policy, please write to the Complaints Committee at the following address: plainte@lacentrale.org
Update schedule: One year after initial adoption, once every two years thereafter
Last revision / update: February 8th, 2020, Equity EGM
Scope of application: Employees (permanent, contractual, interns), volunteers, members, members of the Board of Directors and artists.

1) OBJECTIVES OF THE POLICY
La Centrale galerie Powerhouse is committed to creating a safe and comfortable environment founded on relationships of mutual respect in order to ensure that everyone in contact with the organization is free from discrimination, harassment, and/or fear of discrimination and harassment.

The purpose of this policy is to ensure that staff members, including employees (permanent and contractual), interns, volunteers, members, members of the Board of Directors, and artists involved in La Centrale galerie Powerhouse are aware that harassment and discrimination are unacceptable and incompatible with the standards of this organization.

This policy affirms La Centrale galerie Powerhouse's commitment to prevent and put an end to any situation of physical, psychological, or sexual harassment within its organization, including any form of discriminatory harassment. This policy also aims to establish the principles of intervention that are applied in the organization when a complaint is lodged or when a situation is reported to the Board of Directors or its representative.

2) IMPLEMENTATION
This policy applies to the following places and contexts:

The right to protection against discrimination and harassment extends to the entire team of La Centrale galerie Powerhouse, including employees (permanent, contractual, trainees), volunteers, members, gallery visitors, workshop participants, Board members and artists.

This policy prohibits harassment and discrimination based on the following grounds (hereinafter referred to as "the grounds prohibited by the Charter") and any combination of these grounds:

This definition includes discriminatory harassment as it relates to the grounds provided for it in the Charter of Human Rights and Freedoms.

The notion of harassment must be distinguished from other situations such as interpersonal conflict, work-related stress, difficult professional constraints, or even the normal exercise of management rights (management of presence at work, organization of work, disciplinary measures, etc.).

Discrimination: Any form of inequality in treatment due to one or more of the grounds described above, through the imposition of additional conditions or the denial of benefits. Discrimination can be intentional or unintentional. It includes directly discriminatory actions as well as rules, practices or procedures which, despite appearing neutral, disadvantage certain groups of individuals. Discrimination can be very obvious or it can happen in very subtle ways. Even if other factors influence a decision or action, if discrimination is one of these factors, it is a violation of this policy.

Harassment: Any comments or actions that are obviously unwelcome. These may be words or actions that are, in reasonable judgment, clearly offensive, humiliating, demeaning or unwelcome and based on a ground of discrimination prohibited by this policy. Harassment can be based on any of the grounds of discrimination. Harassment can also take the form of intimidation, that is to say when a party with more power, in a sustained and intentional way, injures or harms another party who does not have the freedom to react. Bullying can continue over time and is likely to continue in the absence of intervention.

Even if a victim does not explicitly speak out or seems to accept harassing behavior, that does not mean that it is acceptable behavior. It can nevertheless count as harassment under the Charter.

The following are examples of harassment based on racial or ethnic grounds:

The following are examples of harassment on the grounds of sex or gender:

More information on recognizing sexual and psychological harassment can be found in Appendix 1 on page 16 of this document.

It is up to all staff to adopt a behavior that promotes the maintenance of an environment free from psychological or sexual harassment.

Any behavior related to harassment may result in the imposition of disciplinary measures, up to and including dismissal.

5) PROCEDURE TO REPORT A HARASSMENT OR DISCRIMINATION INCIDENT
A complaint can be made verbally or in writing. The alleged behavior and the details of the incidents must be described as precisely as possible so that an intervention can be carried out quickly in order to put an end to the situation.

A. Where possible, a person who believes they are experiencing a form of harassment named in section 2 should first inform the person in question that their behavior is undesirable and that they must put an end to it. They should also note the date and details of the incidents and the steps they took to try to resolve the situation.

B. If this first intervention is not respected or if the harassment continues, the person should report the situation to one of the responsible persons designated by the organization so that the problematic behaviors and the means required to end these behaviours can be properly identified.

The responsible persons designated by the organization are the following:

The person who witnesses a harassment situation is also invited to report it to one of the responsible persons mentioned above.

C. When a complaint is made, the designated responsible persons must submit an investigation plan to the complainant within seven (7) working days.

The manager will keep a record of incidents including date, time, location, description of events, witnesses, etc. Every effort will be made to ensure that these reports remain completely confidential.

Anyone who believes that they are going or went through physical, psychological or sexual harassment in connection with their work at La Centrale may also file a complaint at any time directly with the Commission des normes, de l'assurance, de la santé et de la sécurité du travail (CNESST). The maximum time limit for doing this is two (2) years after the last manifestation of harassment.

The complaint can be made:

NOTE: The choice of a person to contact La Centrale galerie Powerhouse first will not prevent them from also filing a complaint with the CNESST.

Anyone who believes that they are going or went through psychological or sexual harassment can file a complaint at any time directly with the Commission on Human Rights and Youth Rights (CDPDJ). The maximum time limit for doing this is three (3) years after the last manifestation of harassment, or, at the latest, 6 months after the facts if the police become involved in the situation.

The complaint can be made:

NOTE: The choice of a person to contact La Centrale galerie Powerhouse first will not prevent them from also filing a complaint with the CDPDJ.

More information on the persons responsible designated by the organization can be found in Appendix 2 of this document.

6) SANCTION MEASURES
Anyone who violates the harassment policy will be subject to appropriate disciplinary action. The choice of the applicable measure will take into account the gravity and consequences of the gesture(s) as well as the previous record of the person who committed them.

Here are the types of possible sanctions:

A person who lays false charges for the purpose of harming others is also subject to appropriate discipline.

The Act Respecting Labour Standards gives criteria to determine what can be considered as psychological or sexual harassment:

These conditions include words, acts or gestures of a sexual nature.

Discrimination on any of the grounds listed in section 10 of the Charter of Human Rights and Freedoms can also constitute harassment. These grounds include: race, color, sex, pregnancy, sexual orientation, marital status, age (except to the extent provided by law), religion, political beliefs, language, ethnic or national origin, social condition, handicap, or the use of a means to compensate for this handicap.

Even if a victim does not explicitly speak out or seems to accept a harassment situation, that does not mean that it is acceptable behavior. It can nevertheless be considered as harassment under the Charter.

The following people are designated to act as responsible for the application of the Policy for the Prevention of Psychological or Sexual Harassment at Work and the handling of complaints from La Centrale Galerie Powerhouse: