Give up the Ghost

Amy Lockhart carves out her place in the world with an X-Acto knife, a pile of cardboard and a paintbrush.

A resourceful inventor, “jerry-rigger” and master of her craft, her fantastical narratives are manifest in live-action films, videos, stop-motion animation, paintings, small books, and handcrafted ephemera. Through these mediums, she carefully fashions a chorus of noisy, charming and grotesque characters that coax us into their make-believe world where paper is king and the queen of the day is a campy and neglectful single mom named Miss Edmonton Teenburger (2002). Her much anticipated one-person exhibition at La Centrale, Give up the Ghost, cumulates Lockhart’s favorite disciplines, namely painting, animation and sculpture, in an immersive installation. Primarily working in cardboard, Lockhart transforms the gallery with handmade reproductions of typically mass-produced objects (laptop, fridge, garbage can), props from her own films (the pipe, knife and fur trap from Tell Mumsy I Love Her (2006)) and life-sized scenes both from her everyday life and from an absurd parallel universe. This includes a recreation of the portable camera set-up she used in 5 different locations to create her film The Collagist, a cut-out animation created in collaboration with artist Marc Bell. Projected in a topsy-turvy installation/recreation of an artist’s studio that is made entirely of cardboard, the show marks the world premiere of The Collagist. Largely influenced by outsider art, community-access TV, internet gossip sites, and 1960’s “The Hairy Who” art collective, Lockhart’s approach and practice embody the ethos of Do-It-Yourself production and the gesture of the handmade, at times literally present in each piece. Often acting as director, scriptwriter and illustrator as well as costume, audio and set designer, she single-handedly produces ambitious projects from her small, at-home studio. With her façades made merely of paper, white glue and elbow grease, Amy Lockhart sets the stage for simple stories that lean on the familiar yet burgeon into the realm of the extraordinary.

Amy Lockhart is a filmmaker, animator and artist currently based in Montreal. Her artwork and award winning films have been exhibited, screened and collected by public and private art institutions and film festivals internationally. Lockhart studied at the Nova Scotia College of Art and Design and has been a resident artist at Calgary’s Quickdraw Animation Society, Struts Gallery, The School of the Art Institute of Chicago and The California Institute of the Arts. Lockhart has received a fellowship from the National Film Board of Canada and support from the Canada Council for the Arts. 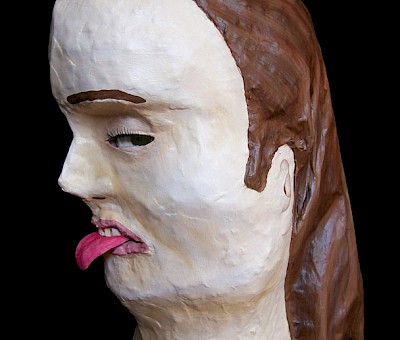