We look to tackle the notion of pretty, prettiness, and “being pretty” as both a source of oppression and empowerment. “You’re lucky you’re pretty” is a statement we have heard over and over again and leaves us with uneasy emotions. This statement is used as a reason to excuse behaviours that may be perceived as disgusting, unfeminine, or unacceptable by societal standards or presented to us as a threat, something we should be weary of. Being told that we are “pretty” and that we are lucky to be perceived as “pretty” is a loaded statement that drags with it oppression, flattery, irritability, and anger. How does being “pretty” excuse our behaviours? How does it celebrate us and how does it shame us?

This work is a time-based installation looking exploring notions of the grotesque and the beautiful within "prettiness". Using materials and colours traditionally associated with femininity, we are creating a suspended “world” complete with its own environment. The instillation alludes to the natural world and the bodily world but is abstracted in itself. Actively adding to the environment during the length of the exhibition enables the work to grow and change, much like we do when confronted with statements about prettiness and ugliness and it’s relationship with gender, shame, and the body. (traduction à venir)

We are a collective female duo practicing under the name of Bush Party. Using found objects and gendered and low brow materials, we create imaginative and immersive environments which are a direct reflection of our process, our experience, and our shameless outlook on the beautiful and the grotesque. The body and nature act as a platform for creation and as a larger narrative about gender, girlhood, and behaviour. We approach these themes in our work through excess and humour, much like our perspective on these issues in our daily lives.

Though we may be two distinct artists, we work as one creature. Our interactions influence our process and where one artist’s practice begins and the other ends becomes clouded. (traduction à venir) 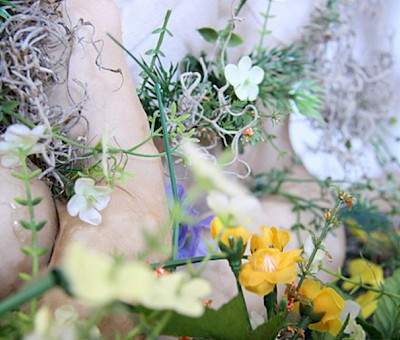