Featuring local and international artist works and voices, this multidisciplinary collective exhibition cross-hatches different practices affiliated with contemporary comic book art. The invited artists for this project are active participants in the contemporary art scene and their work is distributed by publishing houses, shown in exhibitions, published in print and online, and featured as much in cultural institutions as in artist-run venues and events.

By occupying gallery space, The Voice of Images wishes to bring forward a plurality of feminist narrative strategies and creative processes in graphic art. Often devalued by the contemporary art milieu despite their wide sphere of influence, such practices fuel representations of dissent as well as alternative symbolic, political and cultural narratives. This exhibition takes stock of the lack of recognition in the field of visual art for comic books, graphic art and zines. It aims to pay tribute to the efforts that not only disrupted the art establishment but also changed our relationships with biographical, fictional or documentary narrative representations.

Through her artistic practice and research, Virginie Jourdain investigates the shaping and establishment of norms attached to power, hierarchies, gender, practices, narratives.. Her approach as an artist and a cultural worker includes exhibition curating as a recurring activity in Canada and Europe, with feminists perspective (and toolbox) and horizontal and collective practices in art.

Hugo Santerre was born and (still) lives in the Rosemont neighbourhood of Montréal. A bookseller for many years, his career has assured him, to his great joy, of bountiful bookcases and many hours of reading. On his desk and in his drawers, the remnants of former works, official-looking scraps of paper and a certain spiral-bound document indicate that he has a bachelor's degree (Université de Montréal) and a master's (UQAM) in art history. His interest in comics and feminisms leads him to pursue some pretty crazy projects.

ELOISA AQUINO is a Brazilian-Canadian artist and zinester who lives and works in Montreal, where she runs the micro-press B&D Press. She was born in São Paulo (Brazil), where she made zines and worked as a journalist and translator, and moved to Montreal in order to pursue a Master’s in Media Studies. Eloisa's work is focused on non-fictional illustrated narratives on queer topics, and puts forth stories about marginality. She is best known for the zine series The Life and Times of Butch Dykes.

CARO CARON lives on sweet nothings, oddities found at the bottoms of her pockets and rare treasures overlooked by distracted eyes. Illustrations, graphic novels, paintings, etchings, collages, murals, body painting and stage decoration for eclectic events - interwoven with kitch and poetry - are the graphic languages with which she creates her provocative, subversive signature style of art. Caron has been part of the organization of Carnaval Carmagnole and its productions since 2001. She has also been a member of the En Masse collective, most notably for the Big Bang exhibition at the Musée des beaux-arts in 2012. Her work was exhibited in 2013 at the Galerie GAO as part of the "President's Choice" exhibition, which was commissioned by Robert Poulain and the Yves Laroche gallery. She has had several solo exhibitions at Usine C, Cheval Blanc, Divan Orange and the Galerie ELLEPHANT and has participated in numerous group exhibitions, graphic novel publications and the creation of fanzines for Montreal's underground scene. She is also a make-up artist and sometimes scenographer (currently for the Momentum theater company).

MIRA FALARDEAU Childhood full of travels. France, United States, Switzerland, England, Italy. Long stays, sometimes. Parents who like to discuss late in the night while drinking bordeaux and smoking gauloises with their friends. Anne Hébert, Gabrielle Roy, Jeanne Lapointe. Men also, but women left a stronger imprint on me. They formed me, they opened the way. My way. And words, images, laughter. Beginning to publish drawings and ironies about women. Being at the heart of this great women’s movement. Realizing that we are read, that we are laughed. That our speech/words has/have a meaning. Being afraid of this power. Quitting. Returning with another speech. Teaching. Writing. Fighting still because women’s speech still has a long way to go all around the world.

COCO GUZMAN learnt their first long poem at age 4. This poem was about a pirate who praiseds the sea. It is probably due to this poem that Coco became a sea-lover, and a storyteller passionate for the stories of those who do not fit in the normalized society. Coco´s stories mostly developped through drawing and they have gradually taken the form of zines, graphic novels, murals, animations and exhibitions. Coco´s work has been shown in many famous places, but most importantly, it has been read in many queer beds and houses in Europe, and America South and North America.

LISA MANDEL turned 40 this year, attaining the age of maturity... which is why for some time now the Parisian news giant lemonde.fr has been publishing her blog of BD du réel, a genre of comic strip news commentary that is très à la mode en France. But as she likes to say, to herself, at the elite cocktail parties of 9e Art, “Jush becaush ish trendy dushn’t mean ish not cool, another 33 exshport pleashe (a fancy French beer).” Having tackled refugee camps in Calais and a French presidential sighting in a suburban school, she has now turned her eye on Lebanon where she has been living for several months. No longer in the prime of youth, Lisa has produced some twenty comic books. Among them are slightly loopy comics for kids, autobiographies, psychiatric chronicles, Sapphic (auto-) sci-fi, and sociological porno, as well as work she has co-edited with researcher Yasmine Bouagga for Sociorama, a sociological comic book collection published by Casterman

DIANE OBOMSAWIN, alias Obom, cartoonist and filmmaker living in Montreal, has directed several animated films as an independent filmmaker and produced six animated movies in collaboration with the National Film Board of Canada. She has published several comics with L’oie de Cravan and Drawn&Quarterly. Over the years, she has created her own type of narrative, tinted with innocence and reservedness, tinged with humor and great humanity, which frequently integrates autobiographical details. All her pieces are impregnated with gravity and candor, through their subjects as much as the simplicity of the drawings. This astonishing balance provides them with a quality of urban and poetic fable, yet well anchored in life. (© Nicole Gingras)

SYLVIE RANCOURT was born in Macamic, in the Abitibi region, on September 29th 1959. She moved to Montreal in 1979, became a nude dancer and performed for the next ten years in about twenty clubs in the province of Quebec. After dancing for some time under her real name, she became "Barby" on stage and then "Mélody" after 1984. In the middle of the eighties, by publishing Mélody à ses débuts and several other comics about her experiences as a nude dancer, she became the first Canadian woman to self-edit in the comics industry. Encouraged by the success of her comics with bar clients, she began to try to publish them in a magazine format. Her pieces, rather controversial, were still reproduced in many magazines in the United States and in Europe, and then in various anthologies, exhibitions and collective books over the years. She now shares her time between her family, her artistic practice and the various events where she is invited.

CHRISTINE REDFERN is the founder, director and curator of the gallery ELLEPHANT in Montreal (www.ellephant.org). Active in the contemporary art world since 1994 as an artist, writer, curator and artistic director, her mandate has always been to create opportunities for the contemporary art to connect with a broader public. Comfortable in the fields of both art and science, she holds a BFA in Studio Art from Concordia University and a BSc. in Biomedical Communications from the Dept. of Surgery, Faculty of Medicine, University of Toronto.

LIV STRÖMQUIST Born in 1978, Liv Strömquist lives and works in Malmö, Sweden. She started making her own comics and fanzines in the beginning of the 2000’s and published her first comic book in 2005. Since then, she has published seven graphic novels in Sweden and enjoys a certain international reputation, her works being translated into several languages. Strömquist studied political science and sociology at university, an academic path that consolidated her militancy/activism and which has had a strong influence on her artistic practice. Indeed, her work aim to examine and analyse, with a feminist point of view, the different kinds of powers at play in our contemporary societies. 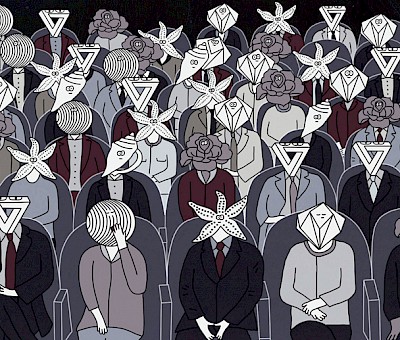