The Aquanauts is an installative exhibition based on the experience of six women scientists who were made to live together in a small vessel on the ocean floor in 1970. NASA wanted to research how women would work together and respond physically and emotionally in a pressurized environment. This was part of an experiment run by the US military to prepare for placing human beings in space stations for extended periods of time, thus they were named ''The Aquanauts'' by the press of the day.

The entire research project was documented in audio and film recordings by the US military. Much remains classified. An accumulation of moving images, sound, objects and paper materials in the exhibition speculate on what such documentation might contain. This work attempts to consider not only human interaction inside the vessel, but also how the ocean acts on them and is impacted in turn. Imagining this kind of affective reciprocity drives the fictions of this project.

The exhibition takes an interest not only in reciprocal relations between the ocean and the researchers, but also the power relations within the group under surveillance. It has been generated under the influence of everything from B movies, 70s new age group dynamics, Greek drama and critiques of 20th century hubris in the exploitation of the ecology of the ocean.

Jen Leigh Fisher is a Montreal-based artist who works with moving images and sound with a particular interest in small-gauge film. Her work has been shown in festivals and galleries across North America and Western Europe. Her practice takes as its subject the limits of fragile systems, both unnatural and natural.

Jen Leigh obtained her MFA in 2011 at the Université de Québec à Montréal and completed her undergraduate study in art history at the University of Toronto, and in cinema production at Ryerson University. Over the years she has worked as a programmer, media educator, curator and video art distributor with a range of organizations across Canada such as Artspace, VIVO Media Arts, Video Out Distribution, and Out On Screen in Vancouver, VTAPE in Toronto, the Eastern Edge Gallery in Saint John's and GIV and La Centrale in Montreal.

'' My practice is oriented by my attraction to the inherent instability of artificial environments. My work accumulates an archive that generates narratives of fallible systems of attachment to such landscapes. I have been working with film, video, installation and sound, as well as the mechanisms and by-products I associate with them.

The Aquanauts, like my other recent projects, was created by crossing an accumulation of historical and scientific documents with a tendency towards unreliable historical claims, counter-narratives, fictional measurements and affective reciprocity with the wilderness.'' - Jen Leigh Fisher 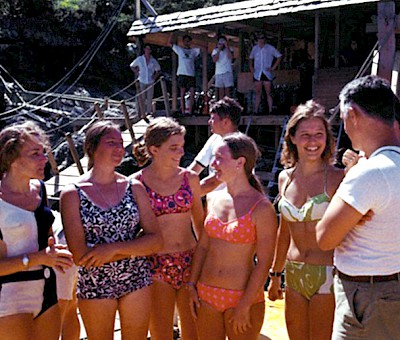