"This Ultimate Emotion", an exhibition bringing together three areas of research (photography, video and installation), is inhabited by notions of corporality, pleasure, discomfort, modesty and sensuality. The camera plays a leading role in the creation process, serving as both scissors to deconstruct the world and glue to reassemble its fragments. The splintering of the human figure in space reveals a rift between the feeling of being a body and the existence of the latter as an object. Funny, vivid and strange, the works presented testify at once to the moral/psychological weight accumulated by matter (both living and inert) and the potential for such matter to offer us joy – this ultimate emotion.

Thank you to VU, Studio XX and GIV
for their support in this project..

Laïla Mestari is a Montreal-based emerging artist of Moroccan descent. Coming from collage and bricolage, her pluridisciplinary practice reflects on corporality, femininity, and the absurd. Recipient of several awards and scholarships (Conseil des Arts et des Lettres du Québec, Irene F. Whittome Prize in Studio Arts, Ada Lovelace Award) Mestari holds a Bachelor of Fine Arts from Concordia University (2017) where she was named Valedictorian of the Faculty of Fine Arts in her graduating year. She recently presented a solo project in Rota (Spain, 2017) and will soon be part of "in praesentia/in absentia", a selection of video works being shown at Dazibao in partnership with MOMENTA and The International Festival of Films on Art (2019). Her project for La Centrale Galerie Powerhouse will also be exhibited at VU Photo in Quebec City this spring. 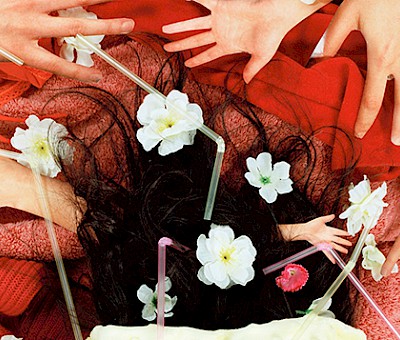