in discussion with Myriam Faraj

Discussion Thursday, March 11, 6 to 8pm
snack and tea will be offered

La Centrale is proud to invite Abeer Alzinaty, aka Sabreena Da Witch, a palestinian writer, musician, producer and storyteller, born in 1984 in Lydd, the airport city of Israel. Performing R&B and dancehall in Arabic and English since 2000, Abeer writes and sings about the experience of being a Palestinian woman living in Israel, criticizing the occupation and it's war crimes while celebrating change and just revolutions.

In Palestine, Abeer studied Film and photography and collaborated with many local and international artists on music and film projects. She was featured in the award winning documentaries “Slingshot Hip-Hop” directed by Jackie Salloum, and “Maria's Grotto” directed by Buthaina Kena'n Khoury. Abeer immigrated to USA in 2007 and will be releasing her debut album women's day 2010.

“In addition to performing her rap music for students, Abeer engaged the students in what was received as being "cool" interactive listening and creative writing sessions in Arabic . Perhaps more importantly, she also presented the girls a model of an articulate, poised, socially aware, and artistically gifted young woman with a steely commitment to activism for a better world and for understanding and tolerance between the world's peoples and cultures.” Michael K. Scott, high school Arabic teacher in Baltimore, (Maryland).

Myriam Faraj is doing her doctorate in semiology at UQÀM where she is studying the spatial and cultural dimensions and dynamics at work in the israeli-palestinian conflict.

Following the discussion, Abeer will perform at the «Speak Up for Palestine !» event, as part of the Israeli Apartheid Week, at Club Lambi. March 11 at 8pm. (http://montreal.apartheidweek.org/) 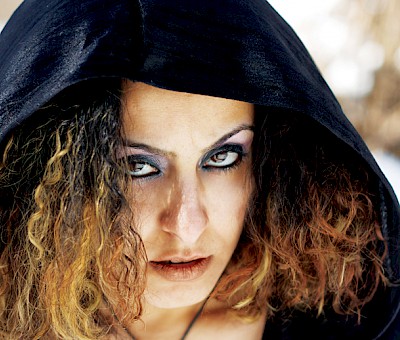