Under the name, Electronic Craft, Mouna Andraos deconstructs everyday electronic objects and reinvents them with a touch of poetry, humanity and humour. This way, she stimulates conversations and personal imaginary about the impact and role of these new technologies in our universe.

As part of ELEKTRA Digital Arts Festival 10th Edition, the La Centrale exhibition will present Andraos’s various electronic interventions. Among these, she will introduce her Power Cart - an old idea from yesterday’s streets adapted to serve the needs of today’s urban dwellers, the Power Cart is a mobile unit that delivers alternative energy to people in the streets. Somewhere between a performance and a public service, this work attempts to demystify questions about sustainable development and renewable energy, by bringing a bit of humour to the general discourse surrounding our dependance on energy. During it’s stay at La Centrale, the Power Cart will make several outings in the streets of Montreal, notably during the Elektra festival. Other objects and installations presented in the gallery includ a word-clock narrating passing time, translucent night lights that glow gently in the dark, a rainbow colored chandelier of wires and lights, and a reinvented music box. Andraos considers technology to be a vehicule for social change, as such, an important part of her work comes from an Open Source philosophy. This approach is based on the sharing and spreading of technical knowledge where the fabrication processes are published under open public licence. Such is the case, for example, with the Power Cart, whose assembly details are explained online. In the same idea, the gallery will be partially transformed in a work space during the exhibition time. The public will be invited to participate in afternoon hands-on workshops, where they will have a chance to create small scale versions of some pieces presented in the exhibition. No previous experience or expertise required.

Born in Beyrouth, and growing up between the East and the West, Andraos has adopted, for the past few years, technology as an open territory, where she can express herself without cultural constraints and reinvent a transnational identity. Andraos holds a Master’s from New York University, a Bachelor from Concordia University and was recently a resident fellow at the Eyebeam Art and Technology Center in New York. She also teaches and maintains a commercial practice. Her projects conceived for the Montreal based interactive production studio Bluesponge have received numerous prizes and rewards, like Best of Show at the South by South West Festival, prizes by Communication Arts and ID Magazine, as well as a CyberLion from Cannes Festival. Her work has also been presented in many festivals in Europe, Japan, North America and recently, at the PS1/MoMA in Queens. She lives and works in Montreal. 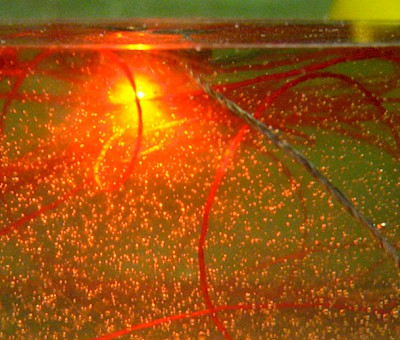