Ballroom is the title of a two-channel 7minute animation loop and related sculptures created at Banff Centre for the Arts during the Still Alive thematic residency. Ballroom is an investigation into animated spaces and materialized transformations, rooted in the tradition of Still life. I position Still-life as both a language and feminist practice in art history. I explore intersections of sculpture and the moving image in dialogue with digital tools, employing high and low materials and technologies to investigate how materials perform. Ballroom is an animation that begins with a reference to the studio of Giorgio Morandi and his late flower paintings. The animation unfolds as the camera pans through a mise en abyme of the studio within the studio and layers of time. Ballroom is a place of performed encounter – it is also the name of a cave in Luray Virginia of which a panoramic photographic reference appears in the animation.

The second animation in this exhibition is titled "Izanami" . This work was developed through research into still life and vanitas in Japanese art. I have used the shape of the narrative from the Kojiki origin myth of Izanami and Izanagi to choreograph the movement of the animated objects. Izanami and Izanagi are deities that created the eight islands of Japan. The sound is created by Yokohoma based artist Nao Nishihara. This project was made possible thanks to a residency at Tokyo Wondersite in Japan and the Conseil des Arts et des Lettres de Quebec.

Born in Antigonish Nova Scotia, Elisabeth completed a BFA at Alberta College of Art and Design in Sculpture and an MFA in Fibres at Concordia University in Montréal. She is a visual artist and a published author of four graphic novels. She has exhibtied and screened her work internationally including Holland Animation Festival, Anifest Prague, Lux London UK and with Eyeworks 2017 in LA, Brooklyn and Chicago. She has attended residencies including Banff Centre for the Arts, Women’s Studio Workshop NY, Tokyo Wondersite-Japan, RAVI – Belgium and the National Film Board of Canada. 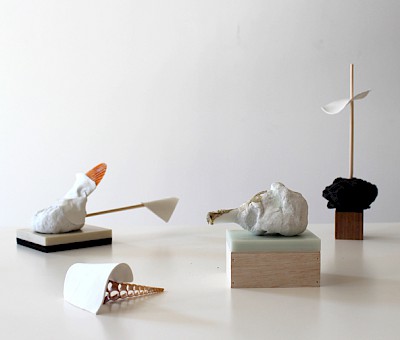