C R I C C R A C is both the beginning and the ending of a story, captured along the way in fragments and sequences. The story lies between France, Canada and Haiti. Starting with a narrative thread centered on the zombie and werewolf figures in contemporary Haitian culture, Gaelle Choisne weaves a constellation of images and sculptures describing the political and historical origins of these figures. In so doing, she investigates the complex proliferation of images and words that (de)construct a narrative, a story.

Born in Cherbourg in 1985, Gaëlle Choisne lives and works in Lyon (France). Since completing her studies at the École nationale supérieure des beaux-arts de Lyon in 2013, Gaëlle Choisne has participated in many group exhibitions, including the pop-up exhibition in April 2014 for the twentieth anniversary of Astérides at la Friche la Belle de Mai.

Winner of several honors, such as the Prix Linossier (2013) which recognizes three students from the École nationale supérieure des beaux-arts de Lyon, one of Choisne's works was presented at the Musée des Beaux-Arts de Lyon in March 2014. In December 2014, as a recipient of the Fondation Typhaine prize (2013), her work was exhibited at the Musée Fabre of Montpellier.

In 2015, Gaëlle Choisne will present a solo exhibition at the Centre d'art contemporain La Halle des bouchers, in Vienne (France), and will participate in group exhibitions at MAMO, Centre d'art de la Cité Radieuse, in Marseille, and the gallery Treize, in Paris. She will also be presenting work in the Havana Biennale 2015 and the 13th biennale de Lyon. The artist is represented by SNAP Gallery in Lyon.

Fontaine graduated in visual arts and arts administration from the University of Ottawa, and completed de Appel Curatorial Programme (Amsterdam, The Netherlands). Since 1992, she has curated and organized several contemporary art events in Canada and abroad. In 1998, she was a Curator and Jury member of DAK’ART ’98, la biennale de l’art africain contemporain, Dakar, Senegal. Her curatorial projects has been presented accross Canada, Segenal and Greece, among others. She is also a member of the International Association of Curators of Contemporary Art (IKT).

Born in Port-au-Prince (Haïti), she has lived most of her life in Canada. Dominique Fontaine lives in Montréal. 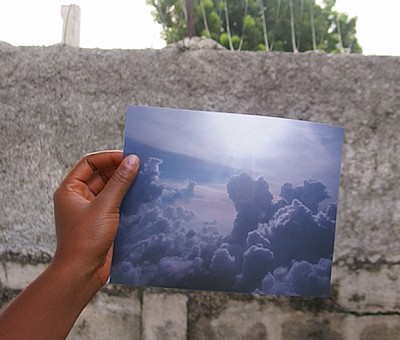