Presenting the artistic practice of many La Centrale members, this exhibition invites the spectator to discover a range of works dealing with issues of childhood as well as rites of passage to adulthood and its responsibilities. Treating both the wonderful and the disenchantment, these works question symbols related to youth, to the supposedly ‘natural’ construction of gender, identities and norm. Some works are imbued with irony, sometimes amusing, sometimes violent, others even address the concept of fate in order to demonstrate the unrealistic and harmful character of some of these representations.

Reinvesting the kind of limitless, no holds barred imagination of children, some works tell stories and lead the viewer into whimsical spaces between critical discourse and hallucination. Thus, the combination of Claire Dumoulin’s images offers an imaginary scenario, where a ground subscidence that happened in Charlesbourg could actually be explained by huge holes being dug out by stuffed animals. Julie Lequin's watercolors evoke a time when she was much younger, when she conducted an inventory of all consumer products found in her home with the logo of the Royal warrants of the British royal family. This inventory was created to link herself in some way to the Queen. Cynthia Shelly Ungar painted this representative of the monarchy, Elizabeth II, in a Pop Art style that recalls her iconic status. Finally, Nadia Nadège invites us to become narrators: her dolls without faces are waiting for us to tell their stories with small pieces of paper that can be completed, switched and put in the pockets where they lie.

Other pieces offer a critical look at the institution of monogamous and heterosexual couples, sometimes linking this ideology to tales that are involved in its apology and celebration. Photographs by Helena Martin Franco include multiple heterogeneous elements that, combined with her sculpture Porte Bonheur, build a narrative around themes of love, fairy tales and the institution of marriage. A model couple is both praised and parodied in the video of Eugénie Cliche, which exposes the myth of the loving couple by representing and codifying the stages of their relationship.

Anne Parisien’s photography also exposes the couple, this time in a more realistic approach and not idealized. The impressive dimensions of the work and the couple's clothing help to cause discomfort among the public, which is intensified by the classical pose of the shown couple, creating a duality between private and public spheres. Virginie Jourdain’s image stands out a bit of the before mentioned concept by questioning the heteronormativity of the ideal couple. The body fragments of the couple that is presented are insufficient to identify the gender of the protagonists, despite the fact that this intimate relationship is exhibited, though also hidden, by different angles of a mirror.

This heteronormativity, like the characteristics of gentleness and kindness naturally attributed to "women", are particularly inculcated to children through tales, but also by religious and moral doctrines guiding women to a certain ideal of devotion. Michelle Lacombe, through her performance, uses some symbols associated with the figure of the virtuous woman in the Catholic religion, in perverting the myth of the ecstasy of St. Teresa.

Other works question the role of the mother and the concept of nuclear family, its structure and function, addressing the sexual division of labor and housework, for example. While some pieces are satirical and critical, Jennifer Schuler opts instead for a playful approach, even ethereal, that question the actions of domestic rituals in a performance reclaiming the term "fairy dust" and evoking the figure of Cinderella. Kathryn Delaney's work addresses the same themes, but in a more sarcastic view: deciding to photograph her sink full of dirty dishes to document this repetitive and domestic act, she offers a response to members of her household who seemed to think that this task was performed by a small fairy. Finally through her video, Myriam Jacob-Allard converted a country song by Marie King into a ballad/ lullaby, dealing with issues about difficulties in combining the roles of mother and career woman.

Some artists are reclaiming and childhood memories and related symbols to make a critical and social commentary. Thus, Mihee-Nathalie Lemoine interprets one myth of her youth, the redskins, exploring the common characteristics of Natives and Asians to the effects of alcohol on the pigmentation of the skin. The project, at first trivial, nevertheless contains a subversive comment about societal perception of ethnic difference and stereotypes. As for Martine Birobent, her sculpture incorporating video reveals the artist as well as muzzled dolls, questioning among other topics the right to speak for women as well as the right to control their bodies. Noémi McComber’s video reveals a woman who willingly accepts food projected violently and impassively in her direction. The immaculate background is slowly transformed, taking the appearances of a dripping painting, and is consistent with the change of the protagonist who becomes increasingly unrecognizable, in this one-way food fight in which any notion of fun is removed. In his video So...When Did You Figure Out That You Had AIDS?, Vincent Chevalier presents, in the form of an archive, the point of view of children on this retrovirus, nourished by prejudice and misinformation diffused by the media in the 1990’s. Finally, Virginie Jourdain offers a performance that questions the probability of a future appropriation by pharmaceutical and marketing businesses which entails the process of gender transformation. For the occasion, she invites the public to, just like Alice, try a drink that will potentially affect the physical body, as containing a low dosage of synthetic testosterone.

This group exhibition organized by La Centrale does not claim any exhaustive representation of the production of its active members, but rather presents a fragment, linked by some concerns, approaches and themes that drive them. We invite you to visit the website of the gallery to get a more complete representation of the work of its members.

This exhibition has been sponsored by Video Assist/Video Mtl and Première Moisson. La Centrale would like to thank its artists, members and Les Brasseurs RJ. 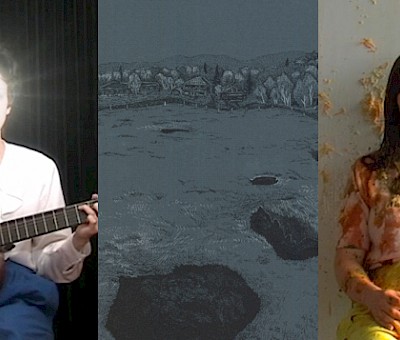