WHO IS ANA MENDIETA ?

Launch and screening of
"Selected Filmworks" by Ana Mendieta
Wednesday, September 7, 6 to 8pm.

The answer, which surprises most people, is Ana Mendieta. She made close to eighty films over the course of her career.

“The films have been critical in the re-evaluation of her work and being seen in a broad national and international context. Before her work was either seen as Latin American art or feminist art. Those constructs are relevant, but there’s more to her work and these films allow that to manifest itself,” says Olga M. Viso, editor of Ana Mendieta: Earth, Body, Sculpture and Performance, 1972-1985.

Who Is Ana Mendieta?

Who Is Ana Mendieta? is a graphic novella about the art and life of Ana Mendieta. The publication casts a glance at the machinations of the art world, looking back in particular to the heyday of the feminist revolution. The text is made up almost entirely from quotes, whether they are spoken by Mendieta or by one of the many other cultural figures that inhabit the pages.

Who is Ana Mendieta? is a collaboration between Christine Redfern and artist Caro Caron. It is published in English by the Feminist Press (NYC) and in French by Les Éditions du Remue-Ménage (Montréal). Internationally known writer, activist and curator Lucy R. Lippard, who was also a friend of Mendieta’s, contributes the introductory essay.

Ana Mendieta was born in Cuba to a prosperous family who initially supported the revolution, but changed their minds once Fidel Castro achieved power. In 1961, at 12 years of age, Ana and her 14-year-old sister were sent to live in the United States. Their parents explained to them it was, “just until Castro’s regime falls”.

Mendieta first discovered her artistic voice while in the Intermedia Master’s Program at the University of Iowa. Throughout her career, her work was an amalgamation of past and present: incorporating aspects of the avant-garde art movements of the 60s and 70s, such as Viennese Actionism, Feminism, Land Art, Body Art and Performance, and giving her work its power through her knowledge of Afro-Cuban religions, prehistoric culture and an indigenous world view.

Using photography and video, she captured her ephemeral bodyworks and earthworks, breaking new technological ground with the visual documentation of her artistic practice.

Starting in 1980, Mendieta made several trips to Cuba and was welcomed back to her homeland as a returning hero. Her relationship with the Cuban government soured before her death, but to this day her work is still taught in Cuban schools and universities. She remains one of the country’s leading figures of contemporary art and amongst the best-known Cuban artists in the world.

Throughout the late seventies and early eighties, Mendieta received various grants and scholarships, including, in 1983, the prestigious Prix de Rome. She left New York City to live in Italy and it was there, in 1985, that she married Minimalist sculptor Carl Andre. Unfortunately, she ‘went out the window’ of Andre’s 34th floor Manhattan apartment less than nine months later. After three years of the case working its way through the courts, Andre was acquitted of her murder.

When the manuscript of Who Is Ana Mendieta? was brought before an editorial committee in New York City, not one person under forty-years old was familiar with her name. “That is when I knew we had to publish this book,” said Amy Scholder, Editorial Director of the Feminist Press.

Who is Ana Mendieta ?
by Christine Redfern & Caro Caron

Do not miss the exhibition at FOFA Gallery ! 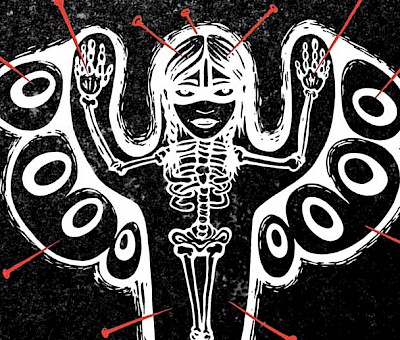