Continuing a cycle that began with Étang (Artefact 2007), I pursue the construction of pictorial environments whose tactile properties, optical and hypnotic, present painting as an enveloping refuge for the viewer. These works, which address questions specific to painting, are conceived as dwellings where I explore notions of surface, appearance, exterior coat, and skin. These are utopian constructions, where the work itself becomes the cavity and the shell, a space for reverie and transformation.

La bonne aventure follows the work Dans le ventre de la baleine, presented at Optica (November 2010) and elaborated around the idea of the artist’s workspace or room. The metaphorical motif of this new work has shifted from the fictional studio to the artist’s destiny, her good and bad fortune. Through the strict use of paintings and minimal furnishings, the constructed habitat now has more in common with a caravan than a house. This refuge has the possibility to relocate, move forward and travel, a personal illustration of the artist’s engagement towards her practice as well as the work’s difficult mobility; the weight of matter accumulating behind us.

A new element is my own presence within the project. During VIVA! Art Action, I will enact a ritual similar to that of fortune-telling for visitors, using a deck of cards1 of my own conception. By appointment, each person is invited to take place inside of the alcove, an extension of the canvas, in the heart of the work. I will then interpret the images to unveil an artist’s destiny2.

To the painter that I am, La bonne aventure is painting.

Since the end of the 1980s, the work of Marie-Claude Bouthillier has been exhibited regularly in Quebec and abroad, in both solo and group exhibitions. Her work has been included in group exhibitions in major museums of Quebec, including the Musée d’art contemporain de Montréal and the Musée national des beaux-arts du Québec. Her exploration of the conceptual space between text and textile in painting and the complex interplay between words and forms – has been a constant thread in her pictorial research throughout her career. Marie-Claude Bouthillier lives and works in Montreal. She holds a Master of Fine Arts from the Université de Québec à Montreal.

The artist would like to thank the Canada Council for the Arts, Galerie CLARK, Atelier CLARK, Yan Giguère and Peter King.

1 Vie d’artiste is a deck of 50 cards illustrated with my own paintings, drawings, and photographs, depicting the themes of a painter's life as described in various novels.

2 This performative action will take place during the VIVA! Art Action festival. The results of these readings will be archived and will later be used to write short stories. More info : vivamontreal.org 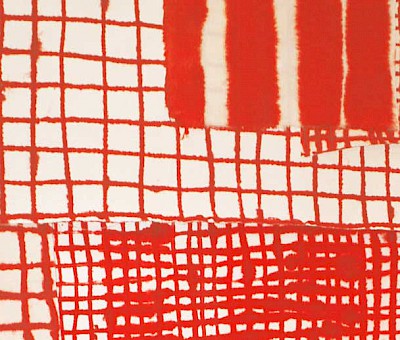