In recent years, Virginie Laganière’s artistic practice has explored the act of occupying and perceiving territories with the help of new media technologies.

Compiling a repertoire of targeted interviews, data collected from the Web, as well as sound and video recordings of spaces which where taken on location, her installations and video essays attempt to establish new symbolism in the logic of space. The sociological, geographical or architectural dimensions that initially feed her work transform themselves gradually into a fragmented and plurireferential arrangement. Her work tries to activate other spectres of perception where a poetic and sometimes caustic imaginary prevails over realities that are often reduced to indifference. For her first show at La Centrale, Laganière presents “Figures de l’indicible”. With this exhibition she wants the public to experience diverse inexplicable natural phenoma and ufological occurrences, where a sinister imaginary is constructed around the idea of rumour and conspiracy. Whether objects of fascination or threat, these phenomena, which are beyond our comprehension, are often portrayed in a sensational or ridiculous way by the media. While the governmental institutions that control this information trie to keep it at bay from the population, the artist reveals accounts and popular rumours inspired by other people’s encounters, by diverse contemporary media as well as archives from the cold war era. She privileges the medium of radio that she perceives as having a kind of “magic”, meaning that when it goes uncaptured, it goes unheard. This sound installation creates a climate of hollow anxiety, evoking an experimental research centre, a military zone or a post-apocalyptic shelter. At a time where rationalizing territories is valued, “Figures de l’indicible” wishes to put forward more elusive concepts, in the range of interpretation, of beliefs and sensations. In this installation Laganière elaborates on a fictitious place, but one that could possibly exist.

Having obtained her Masters in New Media and Visual Arts at UQÀM, Virginie Laganière lives and works in Montreal. Her work has been shown in Europe, Asia and through the Americas. After showing at La Centrale in 2008, “Figures de l’indicible” will be presented at l’Oeil de Poisson (Québec), Galerie Espace Virtuel (Chicoutimi) and Galerie Verticale (Laval) in 2009. 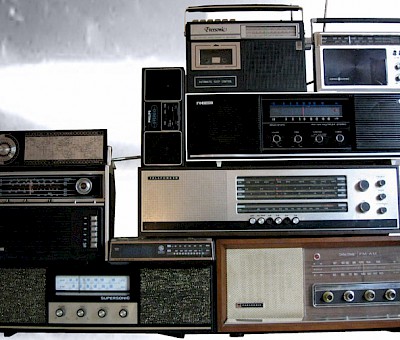