Hero of Our Time

The centerpiece of Aslizadeh’s new body of work is Hero of Our Time (2008), an aesthetically rich narrative video that follows the rise and fall of Hero, a 12-year-old soldier in an unnamed “other” country. Using a combination of staged sequences that highlight artifice, classical filmmaking techniques that emphasize verisimilitude and found/documentary footage from YouTube, the video engages (and sometimes echoes) our cultural database of representations – artistic and otherwise – of the pain of others.* Also on view is Village (2008) - a series of large, long exposure photographic prints of a miniature village. The use of long exposure photography and the exaggeration of scale – both techniques that are considered adverse to naturalism – ironically lends an air of realism to an obviously artificial architectural landscape. The final piece on display is Scourge of the Beast with Two Backs (2008) - a monumental banner that appears at first glance to recall a foreign script, but upon closer inspection reveals a proliferation of guns in varied compositions that recall the act of copulation. *The phrase “the pain of others” is borrowed from the title of a book by Susan Sontag: Regarding the Pain of Others (2003).

Matilda Aslizadeh was born in Isfahan, Iran in 1975 and moved with her family to Canada in 1980. She received her BFA from the University of British Columbia and her MFA from the University of California, San Diego, where she studied film under Jean-Pierre Gorin. Her previous video work, Office, was the subject of solo exhibitions in Vancouver (Or Gallery, 2005) and Montreal (SKOL, 2005) and included in the Golden Horse Film Festival in Taipei (2005), Viper Festival of New Media in Basel (2006) and LA Freewaves Festival in Los Angeles (2006). Matilda currenty lives in Vancouver and teaches at Emily Carr University. She is represented by Pari Nadimi Gallery in Toronto. 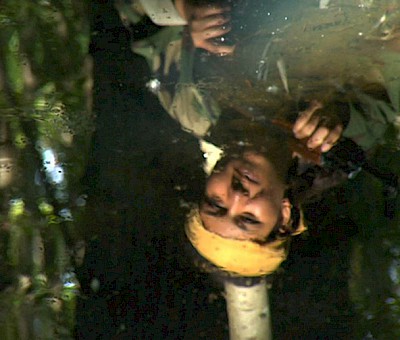