As desire rises and time passes, you’re enjoying the cadence. You forget about power, war, violence. You don’t think about anything … You remind yourself that life isn’t always so complicated … Later on, you applaud warmly. With tears in your eyes, you realize that it’s still possible to have a good time.

A series of autosuggestive performance-tableaux, where contemplation makes room for surprise as well as for strange coincidences, incoherence and unexpected dramatic turns.  The visible becomes enigmatic, while the marvelous is a source of fear like in a disjointed Walt Disney movie. By pushing the limits of subversion in the lived space, we witness an analysis of the human condition between awkwardness and shame, thrilling happiness, cynicism and politely acceptable malaise. A video that refers to cinematography as well as to mainstream culture and collective memory. The sketches can recall a music video, or a commercial, a video game, the shooting of a porn flick, a parodic nod to reality TV …

Eugénie Cliche divides her time between Québec City and St-Lambert, QC. In recent years she has created a no-holds-barred videographic world that blends performance art, photography and video. Combining playfulness, mockery, irony and pathos with a certain violence, she questions the scope and impact of the candid images conveyed by our media-driven societies. Her work has been presented in various contexts and festivals in Canada and abroad, including in France, Morocco, Croatia, Japan, Poland and Macedonia. Eugénie Cliche is a cofounder and active member of the collective Les Fermières obsédées, whose performances have been infusing undiscipline into the ‘action art’ genre since 2001. 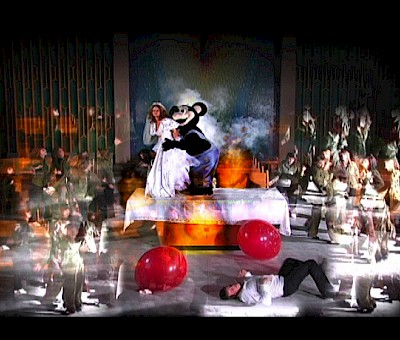