Part of an Edgy Sunday afternoon at La Centrale & Le Pick-Up with 2 artists performing at Edgy Women on March 21st (details: edgywomen.ca) 11am-1pm : Artist Talk with Jess Dobkin @ la Centrale (4696 St-Laurent) Jess Dobkin is a queer performance artist based in Toronto, whose work consistently references the body, juxtaposing raw emotion with off-beat humour. She will present and discuss her most recent works, including her controversial Lactation Station, in which participants were invited to sample human breast milk. followed by : 1pm-5pm : Tex Mex Brunch @ dépanneur le Pick-Up (7032 Waverly) Come to le Pick-Up after Jess's talk, where Lex Vaughn suited up as her alter-ego Peanut Brittle, is making tex mex brunch. Lex is a Toronto based multi-disciplinarian artist who cracks jokes, plays music, and chases girls, all to the detriment of her health. Peanut brittle is a geriatric dandy who once had his eye poked by django reinhardt, sold root beer out of a barrel during the depression, and has a pretty nice collection of moustache combs. 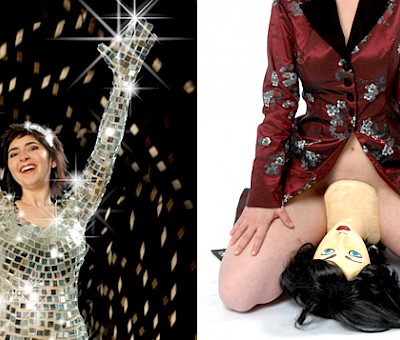