The artist will be at the gallery:

Focusing on the idea of archive as collaborative construction, Kirsten McCrea's Hot Topic Redux residency will simultaneously interrogate and create a feminist archive through a series of open discussions with the public. On display will be 'Hot Topic', a series of 60 paintings of feminist icons based on the Le Tigre song of the same name, 'The League of Legendary Ladies', whose oversized faces viewers are invited to pose with, and an evolving text-based installation depicting the names of feminist icons suggested by visitors to the gallery. The artist's final act will be to paint over the list of names, an act symbolic of the erasure feminist history is constantly fighting against.

Kirsten McCrea is a Canadian artist whose work explores issues of cultural memory, looking at pop vs. underground culture, the media, and popular mythologies. Known for her bright colours and figurative subject-matter, Kirsten is quickly establishing herself as a prominent emerging Canadian artist. Primarily a painter, she is also the founder and editor of Papirmasse, an affordable art subscription that sends a monthly print to hundreds of people around the world every month.

Her paintings have been exhibited nationally and her work has been reviewed by The Walrus, Châtelaine, and The Montreal Gazette, amongst others. She has illustrated for the Polaris Music Prize & the Under Pressure Graffiti festival, and her patterned drawings can be found on notebooks and apparel in stores across the country. When not working on her own she collaborates with the art collective Cease and the drawing initiative En Masse, whose work was recently shown in the form of a massive installation in the Musée des Beaux Arts in Montreal. QC. 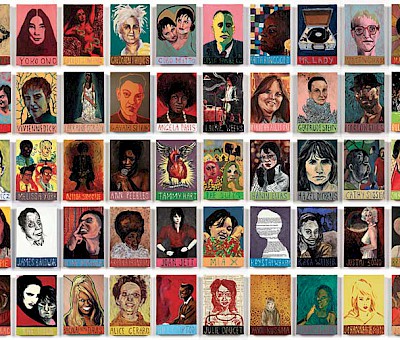