INSIDE THE SOLAR TEMPLE OF THE COSMIC LEATHER DADDY

Will Munro was a Toronto-based artist, cultural organizer, activist, deejay, music promoter and restaurant owner. For him, these roles all provided creative platforms from which to make important contributions to the various communities in which he was involved.

Munro’s exhibition Inside the Solar Temple of the Cosmic Leather Daddy combines several of the artist’s interests and obsessions. The spiritual iconography of ancient Egypt meets the Queer leather subculture of the 1970’s. Through worship and remembrance, Munro revisits the lives lost during AIDS epidemic that began in the 1980’s, endows them with a sense of eternal life, and allows them to still be present among us. Spurred by his own battle with terminal illness, he submerged himself in the underworld of temples and glory holes, death and transformation, Kenneth Anger and King Tut, revealing his interest in do-it-yourself techniques and popular culture.  In his artistic work, as in all of his other activities, Munro brought together seemingly disparate references in a unified expression of creativity and community.

Munro’s artistic practice -- well known within the art world, exhibited across Canada and in the US, and reviewed in canadian and international publications -- extended into his community-based activities. His work with sexuality, shame and empowerment is reflected in his involvement with the Lesbian Gay Bi Trans Youth Line (an Ontario-wide peer-support service for lesbian, gay, bisexual, transgender, transsexual, 2-spirited, queer and questioning young people) where he worked from 1998 to 2008. Considering the relationship between his work with hand-sewn underwear along with his activities as community worker and volunteer, the strong political dimension of Munro’s artistic achievements becomes evident.

Continuing in the footsteps of the artist-collective General Idea -- for whom the creation of works of art was as important as the production of infrastructure for an arts “scene” in Canada -- an significant aspect of Munro’s creative work was Vazaleen, a monthly rock and roll queer event. He started Vazaleen in 2000, and continued this event on a monthly basis for the following seven years.  One of Toronto’s most active promoters of queer culture during the past decade, Munro brought to Toronto such legendary music performers as The Hidden Cameras, Nina Hagen, Kembra Pfahler, Peaches, The Gossip, Jayne County, and Vaginal Creme Davis amongst many others. In his work with Vazaleen (and his other monthly music events) he produced an astonishing amount of artist-multiples and ephemera. Especially noteworthy is Munro’s work with silkscreen posters, produced in the collectively run Punchclock Studio. His silkscreen work was technically ambitious, using multiple screens to create fascinating optical effects. Labour-intensive techniques such as hand-stitching and print-making are also used by Munro both for their inherent aesthetic value and for their association with folk and working-class cultural forms and hardcore punk rock culture.

Iconographically, his work acts as a form of history lesson, making reference to the “whispered histories” of Queer art and activism to create work that is simultaneously artistic production, material culture, and history-writing for sub-alternative communities.  The exhibition Inside the Solar Temple of the Cosmic Leather Daddy brings together Will Munro's diverse interests in a powerful and moving testament of remembrance and survival through artistic creation and community engagement.

Thank you to Margaret and David Munro, the Will Munro Estate, Paul Petro and Andrew Cecil at Paul Petro Contemporary Art, Julia Strutt and Rick Hodges, Emelie Chhangur, Suzanne Carte-Blanchenot, and Philip Monk at the Art Gallery of York University for lending the art work. An enormous thanks to Luis Jacob, as well as Leila Pourtavaf, Cecilia Berkovic, Lex Vaughan and GB Jonesfor their help with the show. 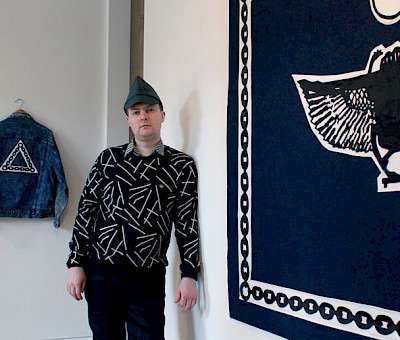