Ironic to Iconic: The Performance Works of Tanya Mars

La Centrale Galerie Powerhouse is pleased to announce the launch of Ironic to Iconic: The Performance Works of Tanya Mars, a new book about Tanya Mars, a recipient of the 2008 Governor General’s Award for Visual and Media Art. This is the second publication in Fado’s Canadian Performance Art Legends series.

Ironic to Iconic: The Performance Works of Tanya Mars is a comprehensive look at Tanya’s career, from the 1970s to the present. The book features extensive photo documentation and includes a DVD documenting her site-specific work, Tyranny of Bliss (2004).

Paul Couillard, the former director of Fado and editor of the book, sums up the importance of the artist's work: "Tanya Mars has not only given us enduring images like the fire-breathing Queen Elizabeth I or a dildo-wielding Alice-in-Wonderland; her work also proves that feminism has grown up enough to include humour in its arsenal of weapons. Mars has relentlessly shown us that the best way to the jugular is through the funny bone, creating a series of compelling 'three-dimensional pictures' that have made her one of Canada’s most acclaimed and important performance artists."

About the Artist
Tanya Mars is a feminist, performance and video artist who has been involved in the Canadian art scene since 1973. She was a founding member and director of Powerhouse Gallery (La Centrale), in Montreal, the first women’s art gallery in Canada; editor of Parallelogramme magazine for 13 years; and contributed to ANNPAC (the Association of National Non-Profit Artist-run Centres) for 15 years. Mars’ work is often characterized as visually rich layers of spectacular, satirical feminist imagery. She has performed widely across Canada, in Valparaiso (Chile), Helsinki and Sweden. In 2004 she created and performed Tyranny of Bliss, a 7-hour durational performance involving over 30 performers who created 14 tableaux in-and-around Queens Park, Toronto. She is co-editor, with Johanna Householder, of Caught in the Act: an anthology of performance art by Canadian women (2004), published by YYZ Books. She is also a member of the 7a*11d Collective which produces a bi-annual international festival of performance art in Toronto. She currently teaches performance art and video at the University of Toronto at Scarborough, and is part of the graduate faculty at the University of Toronto. Mars was named Artist of the Year (2004) by the Untitled Arts Awards in Toronto, and in 2008 she received a Governor General Award for Visual and Media Arts. In the autumn of 2008, Mars will be the Canada Council’s International Artist in Residence in Paris, France.

About the Editor
Paul Couillard has been working as an artist and curator since 1985, producing well over 100 solo and collaborative performance works in more than a dozen countries. He was the Performance Art Curator for Fado from its inception in 1993 until 2007, and is also a founding co-curator of Toronto’s 7a*11d International Festival of Performance Art. He is currently teaching at McMaster University, and was the editor of La Dragu: the Living Art of Margaret Dragu (Fado, 2002). 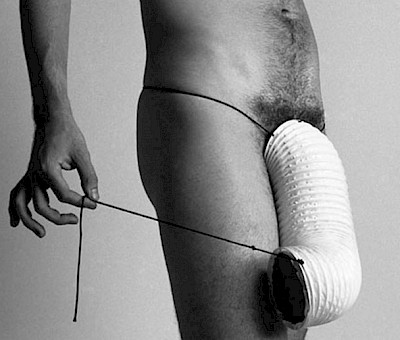