Jones creates a world where her subjects, whether found in a social milieu, a car accident or the ruins of a great building, may be recognized – even prized. Not content to remain within the rarified walls of the gallery, Jones explores the effect of her work upon culture at large and claims a space in it for her overlooked subjects. Hidden histories come to light and enter the cultural arena whereby meanings are layered and accumulated but not without a process of subtle critique. Jones first solo exhibition in Montreal is named after author J.K. Huysmans’s novel Là-bas (1891) which was translated to Down There or The Damned. Her body of work embraces the various interpretations of these translations and the possible meanings of these expressions. Jones will present a survey of her drawings, featuring graphite portraits of crashed and abandoned cars, ruined buildings and psychotic lollipops, from the 1980's up to recent work done in the 2000's. Also on view are trailers for her three films and a selection of the ephemera that was created around the introduction of her work into the popular culture. Similarly to Arthur Symons saying that Huysmans’s work is “...so fascinating, so repellant, so instinctively artificial.”, Dennis Cooper has described Jones’s work as, “Exquisitely focused on the surface…”. Inspired by Huysmans, G.B. Jones focuses on the meaning invoked by an artifice which is readily viewed on the surface, yet always implying that something lies beneath.

During the 1980's, G.B. Jones co-edited and published J.D.s with Bruce LaBruce and, in the 1990's, co-edited and published Double Bill with Jena von Brucker, Caroline Azar, Johnny Noxzema and Rex. She worked with the Toronto-based musical groups Bunny and the Lakers and Fifth Column in the 80's and 90's, and the Italy-based Mariae Nascenti in 2000's. Based in Toronto, Jones has had solo exhibitions in New York City, Toronto and Vancouver and has previously shown in Montreal as part of the Galerie Clark exhibition Teenage Kicks in 2006. Her drawings and films have been exhibited throughout Europe, the United States, Australia, and Canada. Her work has been reviewed extensively in the New York Times, The Village Voice, Flash Art, and Art Forum, among others, and has been featured in numerous books and publications, including the controversial book entitled G.B. Jones (1996, Steve Lafreniere, editor) which was seized at the Canadian border and officially banned in Canada. Her films include The Troublemakers (1990), The Yo-Yo Gang (1992), and the recently released feature, The Lollipop Generation (2008), which was presented as the Gala Premiere at Toronto’s 2008 Images Festival. G.B. Jones is represented by Paul Petro Contemporary Art, Toronto. 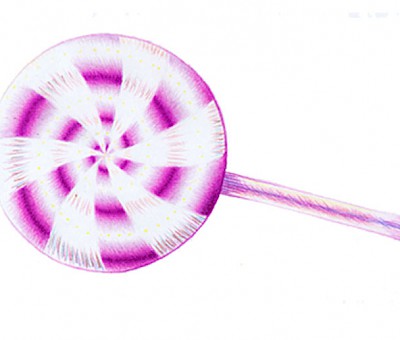