As a Montrealer whose family emigrated from India in the early 80s, the duality of Mona Sharma’s cultural background has remained a crucial inspiration in her practice. In a broad sense, her work has evolved into an investigation of ownership in terms of identity. It does not only deal with seizing control over who we are, but also examines the circumstances in which we relinquish that control.

At La Centrale, she presents The Wedding, an ongoing narrative painting series created in the past two years, with a theme that emerged as a result of her recent marriage, one of her life’s most emotionally charged events. The series is marked by images of both romance and carnage alluding, albeit in exaggerated form, to both the positive and negative aspects of this sacred ritual. “As a Hindu marrying out of caste, culture and race, the most troubling concern I had was not that marriage would fall short of my expectations, but that somehow it would not live up to a standard rooted in a culture and past with which I could share no dialogue. Through these works, I have been able to deal with the pain and frustration of being forced to cut ties with where I come from.”

The series plays out in a very theatrical manner. Mona Sharma is less concerned with creating a space in which the mind of the viewer could wander than with building a stage on which characters could act out their roles. Shifts in fore-, mid- and background are abrupt. Relief materials such as string, wood and paper are introduced with little regard to illusionist elements, breaking the serenity of the picture plane and placing greater emphasis on the unfolding narrative. These paintings are largely inspired by religious sculptural motifs present in many Hindu temples that she visited on trips to India.

She uses variations of herself to portray the bride, groom and the rival suitor in order to give license to one’s ability to view such situations from various standpoints. The representation of the groom’s family as a mass of skeletons relates to the burden of upholding the standards of a bygone era. In addition, the use of primarily Caucasian models to depict bridesmaids and other guests is an attempt to address the alienation of experiencing such a weighted Oriental ritual in an Occidental environment. Everything comes together to present a heavily-staged environment on the verge of collapse.

“Marriage is no breeze in any culture. It is an evolving conflict between traditional ideals and new realities that governs our view of family and society as whole.“

Mona Sharma lives and works in Montreal. She is currently enrolled in the MFA program at Concordia University. Her work consists of painted and drawn narrative, as well as sculpture. She has had shows at Dare Dare (2009), VAV Gallery (2007), Warren G. Flowers Gallery (2002, 2004) and Art mûr (2006). This is her second solo exhibition. 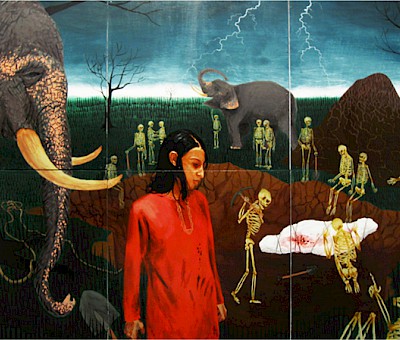