Anne-Marie Proulx sees the archives as material to make images and tell stories. During a residency in the archives of La Centrale, she examined the administrative documents and artist files in order to find extracts imprinted with accidental poetry. Les résolutions presents itself as a collection of these chosen pieces : a few well laid-out words, dated affirmations, incomplete correspondences, existential problems and miraculous resolutions.

Anne-Marie Proulx is an interdisciplinary artist, writer and curator based in Québec. She holds an MA in Art History from Concordia University, where she also completed a BFA in Studio Arts after a year of attending the Nova Scotia College of Art and Design in Halifax. She is a member of the artist-run center Skol and regularly works on collective publication projects. Her work has been presented in Québec, Canada, the United States and Portugal. Since April 2014, she is Artistic Director of VU, centre de diffusion et de production de la photographie. 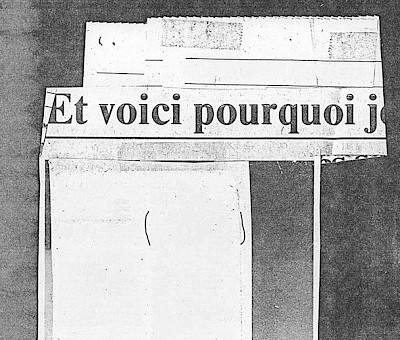