Julie Favreau’s practice, largely influenced by theatre, body-theatre and dance, is marked by diverse exhibitions, workshops and performances.  Amongst these, she participated in the exhibition Glissements.  Art et écriture, at the Galerie de l’UQAM, and in a workshop with Gwénaël Morin and Yves-Noël Genod at the Laboratoires d’Aubervilliers, in Paris. In Montreal, her work has been shown at Clark Gallery, Centre Dare-Dare, and The Leonard and Bina Ellen Gallery. In 2010, she will be showing her work at Guelph Goodwater Centre, in Toronto, Axenéo in Gatineau, Est-Nord-Est in St-Jean-Port-Joli and La Centrale Galerie Powerhouse, in Montreal.

Julie Favreau produces installations, videos and performances that question our relationship to psychological representation. She often uses found or collected objects as a basis for the invention of a décor, where she invites performers to interact and develop unusual relationships with the given space.

“Through my process, I strive for the antithesis of comfort.  I am looking for something which makes me feel the whole weight of our relationship to the Psyche of someone else, to his or her sensibility.”-Favreau

In the video installation Their Cinema,  the characters evolve under the influence of the  surrounding space; a décor invented by Favreau, half-way between a theatre and a film set.  Within their respective environments, the performers engage in choreographic exchanges with the objects within the space.  They are isolated without being alone, because they belong to the space. Their body almost becomes an extension of it, a body-object with the space acting as their partner.

The artist invites the viewers into her free-interpretation stories which become visual scripts where the narrative qualities of the atmosphere take over the logical order of things. The slow and precise flow of the performers’ movements are combined with a musical environment in order to generate a rhythm that flirts with visual hypnosis. It is a videographic work based on movement, where the gesture holds the meaning and weaves the story. It relies on repetition: the character revisits the same places, repeats a gesture, makes us doubt the nature of the scene we are watching. Is it an awakened dream or an additional clue for the reading of the scene?

“It is as if I was infiltrating the mind of people who see the world differently, with uncommon modes of perception – accelerated, slow-motioned glimpses of time – developing capacities to sense the state of the other. In short, a form of being that some people will call craziness, others shamanism.”-Favreau 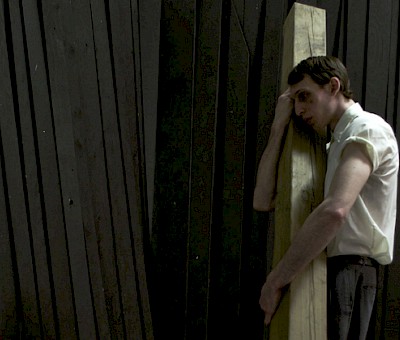