Julie Faubert is interested in the space that is occupied/unnocupied by the body in western society. Her work has been presented in many solo and group exhibitions in Canada and in Europe. She is presently working on a research project regarding sound installations in urban environments (PHD in urban planning, Université de Montréal). Through her most recent urban intervention, http://lesmots.dare-dare.org/, she explores the urban space as a terrain for collective reflection.

Cartographie Sonore An urban walk project that fuses the real and the imagined in a way that opens up the neighbourhood space to a more complex reading. Through Faubert’s intervention the urban soundtrack is altered, magnified, troubled. The artist poses the question : does real=true? Or, better, does fake=imagined? We are left in doubt.

Emily Laliberté is a multidiciplinary visual artist who explores, through her work, the large spectre of feminine identity. Voicing the words of strangers, her tales of encounters question our relationship to reality and fiction. Her recent shows include Perspectivesat Anaid Gallery (Romania) in 2008, and Gender Alarm, at La Centrale, in 2009. Next October, she will present  Denise, a poetry-action, at la 5ième Biennale d'art performatif de Rouyn-Noranda.

After/Before Glitters and sparkles in the eyes, the fushia colour of the walls, a Sunday that seems like the day after a pyjama party...After/Before emerges us in the universe of our next door neighbours: four women, a few stories, a touch of intimacy, a trip at the heart of the everyday.

k.g. Guttman earned her Masters in Fine Arts in Open Media at Concordia University in 2007 with a term as an exchange student at DasArts, Amsterdam, Graduate Studies in Performance. Exploring the intersection of dance, performance, and the visual arts, her work takes the shape of exhibitions, residencies and performances within diverse institutions. Recent residencies include the Pavillon, Palais de Tokyo, and Pépinières Européennes pour jeunes artistes (with Compagnie David Rolland, Nantes). Her recent installation work was exhibited at L’Espace Blank in Paris, by invitation from Christine Macel.

July is part of an ongoing practice of interventions in pubic space, in which Guttman uses archival research, performance and drawing to collect and create alternate ways of knowing the city. The artist approaches people along boul. Saint. Laurent, and asks to accompany them to their destination. When going towards someone else’s destination, minor aspects of the city reveal themselves.

Mona Sharma is a Montrealer of Indian origin who works primarily in the mediums of drawing and sculpture. Her first two solo shows includeThe wedding, at la Centrale. She is currently pursuing her MFA at Concordia University.

It’s Not Impossible-It’s Public This work is intended as a way to give neighbourhood dwellers the opportunity to play the role of an artist by imagining their ideal public art projects for boul. Saint-Laurent. “My job was to draw diagrams of their suggestions. The twist is that I tried to find ways for all of their ideas to coexist harmoniously. My success is debatable.”

Virginie Jourdain is an activist and visual artist, member of the Dyke Rivers collective, and exhibitions coordinator at La Centrale. Through her art practice she questions the processes of normalization and the formatting of identities. Deciphering common discourses  and various expertise: juridical, medical, cultural and political, she reformulates practices objects and gestures that seem trivial but that nevertheless imply forms of exclusion and discrimination.

Florence S.Larose recently obtained her BA in Intermedia/Cyberarts at Concordia University. She works with video, magazine cut outs, flutes and corn syrup. Obsessed with soap operas, karaoke and synthetic hair. With a bit of madness, she explores the interstices between pop culture and feminism.

Pro-Choice Cake Tasting and Spermicidal Performance with Samuel St-Aubin On Mai 4, 2010, the conservative senator Nancy Ruth suggested to the women who protested fin favor of the right to abortion to “shut the fuck up” to avoid aggravating the situation in the context of the upcoming G8 and it’s maternal health care agenda. In reaction to this anti-feminist comment, Florence S.Larose and Virginie Jourdain propose a pro-choice culinary experience and the live extermination of sperm, to be collected during the day at La Centrale. A true communal experience to express (and digest) our collective anger against political conservatism. 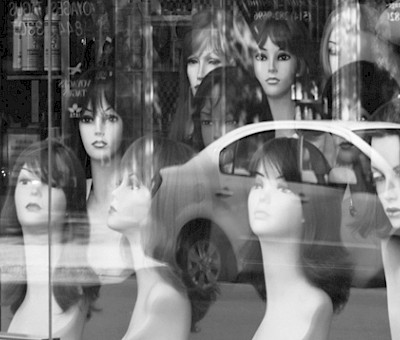