La Centrale presents an exhibition of the work of two artists that draw upon reflections about weaving, materiality and feminist practices.

To confirm a visit or schedule an alternative visiting hour please contact the artist by email (woventhreads@gmail.com)

Please Note: Hours are subject to change without warning

is an interactive installation where the gallery visitor gets to be part of the transformation… by selecting one gift from the mountain, all the while leaving the grass to regrow.

Héritage began as a weekly routine where I would open up my mobile studio-loom onto the streets of downtown Montreal. Once the weather became too cold, the loom hibernated for the winter in the depths of a research library in the city. From this simple beginning, this interdisciplinary project has grown to explore the personal, the historic and the more recent rise in craft culture in Quebec by drawing on the province’s rich history of weaving and craft revival during times of economic instability. In this way, it is an attempt to celebrate the ingenuity of the handmade, the potential of the exchange and the power of human resilience.

'' An older man in a marine-blue winter coat with wispy white hair and a groomed beard leans in towards me.

'I’m from Lac St Jean. I am the son of a family of 13 children. My mother had 87 years of age when she passed away two years ago. She did everything, the table cloths, the carpets, the catalogues (traditional Québec bed covers).

She would shear the wool from the sheep, wash it, card it and spin it into yarn to be woven. Don’t forget the tension, it’s the most important, she would always tell me', adding as he walked off.'' - jenna dawn maclellan

- excerpt from the performance Legend of an Urban Weaver for the exhibition.

"LOOM MUSIC by Wednesday Lupypciw is my attempt to tell the story of the 1975 formation of the main weaving guild in Alberta. In the video, my desire for beauty and non-essentialist politics stand out more than my commitment to tell the truth, which is lost to me by decades and a lack of source material. The illogical narrative arc and fantasy sequences satisfy my urge to relate emotionally to history/herstory; this is a starting point for something greater. This video is dedicated with love to Prairie craftspeople before me." - Wednesday Lupypciw

jenna dawn maclellan was born in the Prairies, raised in the community of Sioux Lookout and has been, until recently, residing in Montréal. Location, accessibility and personal encounters have greatly influenced her socially-engaged practice, where she activates memory and site through performative gestures in public and private spaces inspired by the everyday. She has become a story-maker, a builder of social sculptures, a guardian of memories, a social activator and a transmitter of lost skills.

Wednesday Lupypciw is from Calgary, Alberta, where she pursues chaotically overlapping video and performance art practices. To make money she is a part-time maid and physical labourer. She also maintains a concurrent practice in textiles—weaving, machine knitting, embroidery and crochet—but this is done mostly while procrastinating on other, larger projects. The purposefully lazy Feminist art and activist collective LIDS, or the Ladies Invitational Deadbeat Society, is one of those projects. The output from all of these things is different, but the politics are the same: Queer, pluralistic, fairly compensated, critical.

Lupypciw is a Fibre programme graduate from the Alberta College of Art + Design, and has worked and exhibited in various spaces throughout Canada including the Textile Museum of Canada, The Art Gallery Of Alberta, The Banff Centre, The Klondike Institution for Arts and Culture, TRUCK and Stride in Calgary, the Feminist Art Gallery and FADO Performance Art in Toronto, Centre SKOL and La Centrale Galerie Powerhouse in Montréal, and EMMEDIA (also in Calgary). 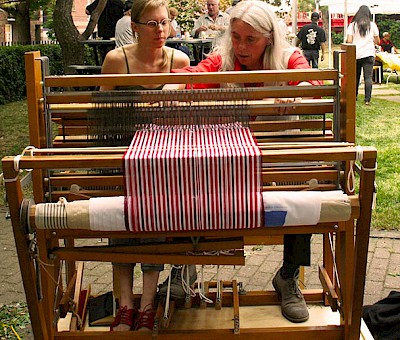