Reconfigurations : A Procession of 48 Flags

In Reconfigurations, Noémi McComber redesigns and reformulates the Quebec flag, altering its formal components. She proposes multiple variations of the “Fleurdelisé”, drawing references from local popular culture, the native flora and fauna of Quebec, contemporary history and folk heritage. This opens up new possibilities for interpretation, through the use of non-consensual symbols. The significance of the iconography of the flag is thereby reexamined and put into question, in resonance with the specificities of the land, its history and its inhabitants. Reconfigurations comprises a series of 48 new flags, aiming to deconstruct the official symbolism of the “Fleurdelisé”, which revolves around European monarchy and Catholicism.

Reconfigurations allows for a critical distance from these monolithic representations, creating a breach within the established official discourse, while offering an emancipatory path in the proliferation of a diversified and reimagined flag.

Reconfigurations : A Procession of 48 Flags celebrates the multiplicity of Quebec identities, and puts these new representations in motion, with the participation of the public.

For more information on the project : www.noemimccomber.com/reconfigurations.html

Noémi McComber completed a Masters degree in Visual and Media Arts at Chelsea College of Art in London, UK (2002). She has since been actively involved in artistic and curatorial projects, focusing on multidisciplinary (drawing, video, photography, performance and urban interventions) and collaborative works. Her artwork has been shown in Finland, Russia, Denmark, Colombia, Greece, Equator, Austria, Wales, Spain, France, Scotland, in the UK as well as in Québec and Canada. In 2011, she presented the solo project New Flags for Old Monuments at Dare-Dare in Montreal, Acercate mas at Casa Tres Patios in Medellin, Colombia and La peau du bronze, a solo show at la Maison des arts de Laval. She also presented two performances that year, at Viva Art Action! performance festival and at MAVF In Winnipeg. In 2013, she had a solo show of new video works at Optica gallery in Montreal and was part of the Corrections Marginales exhibition at Studio XX. She presented Reconfigurations: La procession des drapeaux at Le Lieu in Québec city in 2015 (curated by Sonia Pelletier and presented in collaboration with RAIQ) and in the St-Michel borrough of Montréal (Transversal, curated by Alain-Martin Richard). She is a founding and active member of L'Araignée, a feminist collective for the dissemination of contemporary art. She lives and works in Montréal. 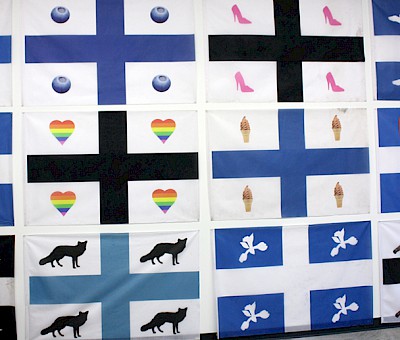