Recueil de gestes pour nourrir (Compilation of Nourishing Gestures), a fragment of a vast project begun in 2013, considers the value of acts of giving and encountering. Catherine Bélanger wishes to emphasize the importance of the ways that ordinary people do things. A kitchen-like artificial domestic space created by rear projection is animated by the gestures of Ms. Margot Fortin, aged 70, and her 8-year-old granddaughter, Marcia Lalonde. They use an old flour-sifter to practice the methods of past generations, in ways that are both innovative and filled with affection. Such gestures are thus preserved and translated in a cartography that stirs up affective memory through the reciprocal relationship between intimacy and affiliation.

Catherine Bélanger lives and works in Quebec City. She holds a Bachelor's degree in Visual Arts and a Master's degree in Interdisciplinary Art from Université Laval. Her interest in everyday anthropology is felt in her animation work and in her video and digital installations. She is an active member of Avatar, Quebec City's center for artists in audio and electronic art, and has presented her research at the Mois Multi, International Festival of Multidisciplinary and Electronic Art in Quebec City in 2017 and in Bangkok in 2015. In addition, she has participated in various collective events since 1997, in Quebec City and in the surrounding regions. Since 2004, she teaches visual arts at Cégep Limoilou. 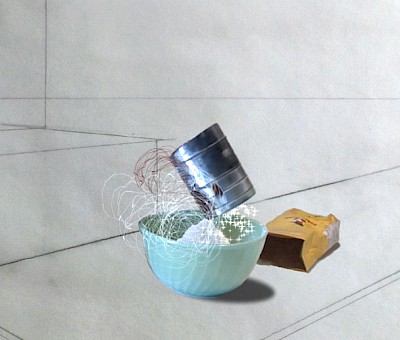