Sticky Feelings presents work reflecting my ongoing research into disgust and the fear of contagion. Using biological materials, living organisms, and performance, I explore the politics of affect and questions of agency. I work with smells, body fluids, swarms of insects, and bacteria because they resist containment, cross boundaries, and are affectively potent. I look at how threat is registered within the body by rupturing ideas of its self-containment. A background in in biology, psychology and activism allows me to bring multiple perspectives to the work, from art and science, as well as experience from positions of privilege and more marginal positions. The focus on an aesthetics of care and emphasis on proximity seeks to create an engagement rather than push people away.

Currently based in Berlin, Alanna Lynch received an MFA from Valand Academy in Gothenburg, Sweden and a BFA in Fibres from Concordia University. She also has a Masters in Library and Information Studies from McGill University and a Bachelors in Psychology from Queen’s University. She has exhibited and performed internationally, including at Art Laboratory Berlin and Collegium Hungaricum Berlin (Germany), Gothenburg Konsthall (Sweden) and the Tempting Failure Performance Festival (London, UK). She has been a visiting lecturer at the Weißensee Academy of Art in Berlin and has presented her research at conferences in the area of art and science. She is a founding member of the collective Scent Club, based at SPEKTRUM in Berlin. 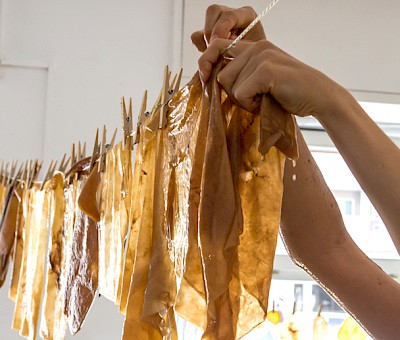