THE TURNING OF EYES INWARD

“Our rationalist Cartesian culture despises the uncontrollable unconscious; its intuitions are feminized and in effect castrated as a force, a power. Accessing this implicit space involves a fragile address, a belief in transparent thresholds-most of which are blocked for us-through which spirits, coincidence, sacral and unpredictable guidance and information might occur.”1

The Turning of Eyes Inward emerged out of a desire to undermine the usual hierarchy privileging rational, linear experience over that which is murkier, which lies beyond traditional means of perception and understanding. It aims to explore methods of making that place value on intuition, associative thinking and the flux of chance and control.

This body of work occupies a material place between painting and drawing. It features a series of intimately drawn works on paper whose strength and potency lies in the consistent, daily ritual practice of their making. The repetitious action of the ritual, and the somewhat meditative practice opens up a liminal space and allows for the crossing of thresholds into an ominous universe of the unconscious. It is this dark, shifting, uncontainable and often inarticulable world that is conjured by the work- an uncanny place of doubling, burial and transformation.

This show takes the notion of the sigil as a point of inspiration. The term sigil refers to a symbol or image in which a desire is intentionally embedded or to which magical power is imputed. The Turning of Eyes Inward explores the power and magic inherent in the act of creation and the weight of memory and emotional resonance that can be imparted into an image.

The final work in this exhibition is an animated drawing- it sets the sigil in motion, acting out its magical and transformative powers..

Sarah Pupo draws, paints and animates. She is based in Montreal where she is currently completing her MFA at Concordia University. 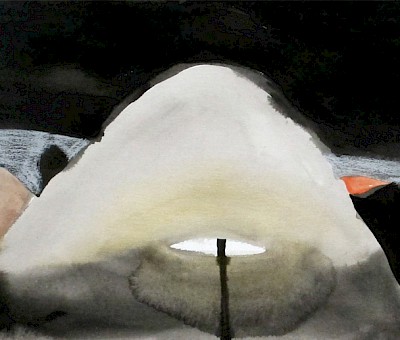