VIVA ! LA CENTRALE *
Coming from a long history of performance presentation, La Centrale GaIerie Powerhouse is proud to offer a rich and diversified programming for this second edition of Viva ! art action

Exploring the boundaries between performance and entertainment, the invited artists borrow elements from the party scene, popular gatherings, ritualistic celebrations, and disco culture as well as theatrical mise-en-scène. Here are the details of our 2009 Viva ! edition.

Parcours n° 6899 / Gwendoline Robin
The performance unfolds in different stages, each action setting up a tension between the body, space and the expectation of the moment where everything could shift.

Belgian artist Gwendoline Robin is a visual arts graduate of L’École Nationale Supérieure des Arts Visuels de la Cambre in Brussels (1992). Since 1997, she has been creating installations and performances revolving around the body, space and explosive materials. Gwendoline Robin lives and works in Brussels.

Lilibeth Cuenca Rasmussen works primarily with video and performances. With consummate style and voracious curiosity, she navigates the interspaces between different kinds of realities that can lead to extremes. Taking her own Danish-Filipino background as point of departure, she gathers, adapts, and universalizes these narratives in her both critical and humorous approach to core issues such as identity, culture, religion, gender, and social relations.

Dayna McLeod is an intermedia artist who likes to try new things. Alexis O’Hara gets excited about sound art, flashing lights and fort-building. When they are together, things turn loud and colourful. With A/V MACHINE, their first duo collaboration, they combine their love of diy technology, bon-vivant shit disturbances and cocktails.

Panthéon Pétro / Dominique Pétrin
Panthéon P. is a petrochemical sabbath, neither black nor white, trying to reach the ‘inaccessible’ through counterfeiting and rhythm, like an in-vain paper voodoo.
It’s a wild celebration of women and freedom.

Internationally reknowned Montreal-based visual artist Dominique Pétrin was introduced to the public through her anti-diplomatic performances among the musical act Les Georges Leningrad. Working with silkscreen for ten years, she is currently integrating hypnosis and other consciousness-altering strategies into her projects. She has collaborated with Sophie Calle and choreographer Lynda Gaudreau, as well as Jerusalem in my Heart. She is currently studying Cognitive Sciences at Université de Montréal. Her work borrows from outsider art, surrealistic methods and Bollywood cinema.

The Two Gullivers / Flutura & Besnik Haxhillari
In an effort to trace lines with their bodies and give body to the lines of the drawing, Flutura and Besnik Haxhillari create a contaminated image due to the to-and-fro between drawing and action. In their performance practice, the drawing takes on the role of an embodied thought or writing, affirmative and in movement. There are also intimate and personal autobiographical elements permanently confronted to other social and political preoccupations, in a more global perspective.

Born in Albania, Flutura and Besnik Haxhillari have studied art in Tirana, Lausanne, Berlin, and are presently finishing a PhD in art at UQAM. They have been in Montréal since 2000. Among other places, they have presented their work at the Venice Biennale (1999), at the Tirana Biennale (2003), Beijing Biennale (2005), Viva ! art action (2006). They have received grants from the CALQ and the Canada Council for the Arts. Since 1998, under the name The Two Gullivers, they have been doing performances that play with tensions between identity-defining, self-image and multiple dialogues.

*For complete schedule and programm : www.vivamontreal.org

La Centrale would like to acknowledge the continual support of our artists, members, the Danish Ambassy, the Délégation Wallonie-Bruxelles, the Conseil des arts et des lettres du Québec, the Canada Council for the Arts, Conseil des arts de Montréal and les Brasseurs RJ. 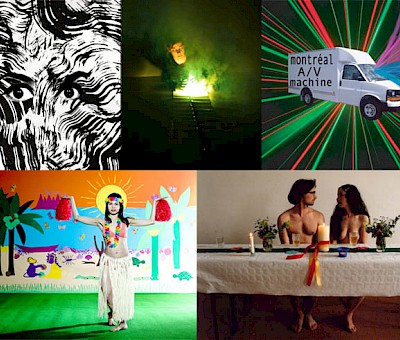