Performance Residency with Bojana Videkanic, Claudia Bernal and the students of the University of Waterloo

“Visibility is a trap it summons surveillance and the law; it provokes voyeurism, fetishism, the colonialist/imperial appetite for possession. Yet it retains a certain political appeal.” (Peggy Phelan, Unmarked, 6).

Body is powerful and vulnerable at the same time; it carries, cares, pushes, guards, gives, it is tired, frails, it is surveilled, codified, restricted, tortured, often visible, but increasingly specific bodies are invisible, a body is political, it fights back, it sustains and makes. As a tool, a medium, a site of meaning, a site of power and fight the body is important. That is why performance art has of late become popular. As an art form, it is able to address the above-mentioned states, ideas, and meanings precisely because it so poignantly expresses them through proximity and contact between various bodies (performers, audiences, witnesses etc.) It makes the body visible, yet it also makes those observing and witnessing visible. It reveals as much as it hides.

In a format of a five-day performance workshop, and public presentation format, and in collaboration with Montreal artist Claudia Bernal and La Centrale Gallery, performance artist Bojana Videkanic and her performance art students studying at the University of Waterloo’s Fine Arts Department will address the many ways in which the body makes meaning, especially in the terrain of contemporary aesthetics and politics. Coming from a variety of backgrounds and experiences the performers will bring to the surface the kinds of questions we need to ask today: Who is visible and why, why do we have to bring back attention to materiality and the body, and why and how can body become political. Through intimate workshop program the students and practitioners of performance will interrogate the meanings of the body in its relationship to feminism, race, care, resistance, politics, solidarity and togetherness. During the public portion of the project, Claudia Bernal, Bojana Videkanic and the students will present their work at La Central when the public will be able to witness their work.

Bojana Videkanic is a performance artist and an art theorist born in Bosnia and Herzegovina (former Yugoslavia). She became a stateless person after the fall of her native country and came to Canada as a government-sponsored refugee in 1995. Her artistic practice mines personal experiences of displacement, movement, and identity and intersects it with larger political, social and cultural questions. Her most recent work deals with the transformation of her native country into a law-free zone for the development of various neo-liberal capitalist projects and new forms of colonization. She is also working on a project probing the idea of neurocapitalism and its relationship to the body. Videkanic is an assistant professor in fine arts at the University of Waterloo, and she is the board member of the 7a*11d International Performance Art Festival Toronto. Videkanic has exhibited at festivals such as Nuit Blanche Toronto (2009), 7a*11d International Performance Art Festival Toronto (2010), MS:T International Festival from Calgary (2012), Hemispherica, Montreal (2014), IPA (International Performance Art) Platform and Workshop, Bristol (2015), IMAFestival, Serbia (2016), Hamilton Biennale (2017), Nona International Residency—Sarajevo, Bosnia (2019) and La Centrale Gallery Montreal (2019). Videkanic also curates. 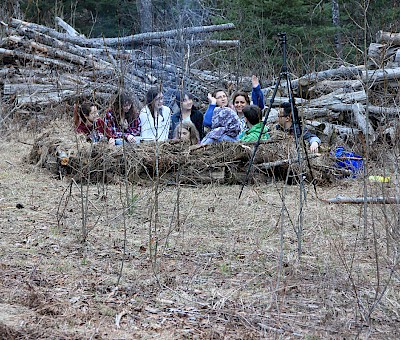