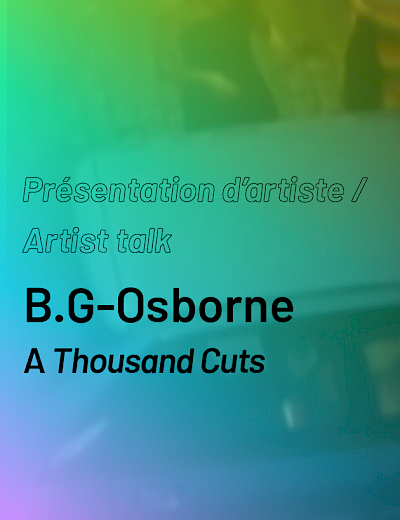 La Centrale galerie Powerhouse is proud to present an artist talk with B.G-Osborne following the exhibition A Thousand Cuts, presented from February 12, 2021 to March 21, 2021 in the window of La Centrale. The video A Thousand Cuts will be visible on La Centrale's website until April 12, 2021 on this page.

During the talk, B.G-Osborne will discuss their work, specifically A Thousand Cuts, which addresses the misrepresentation of trans people in film and television and the ongoing reality of violence that trans people encounter.

The discussion will be held on Zoom on registration and will take place in English, but questions may also be taken in French. To register, please fill this form.

A Thousand Cuts is a three channel found-footage video installation that addresses the misrepresentation of trans people in film and television and the ongoing reality of violence that trans people encounter. The compilation is accompanied by a scrolling text video that lists over 1000 names of documented trans murder victims from January 2016 to September 2020.

B.G-Osborne
B.G-Osborne is a queer, bigender settler of Scottish and British descent born and raised on Treaty 20 territory (Southern Ontario), currently working in Tio'tia:ke (Montréal). Osborne’s ongoing projects seek to address the complexities and revisionary potential of gendervariant representation/embodiment, and unpack their experiences with mental illness and well-kept family secrets. They place great importance in showcasing their work in artist run centres and noncommercial galleries across Turtle Island.

To learn more about the A Thousand Cuts project and the artist's work, here is an interview with B.G-Osborne filmed during their exhibition at La Centrale.