Marie-Hélène Cousineau is a producer and film director. Since 1991, she has been working with inuit collaborators in Igloolik (Nunavut), Puvirnituq and Inukjuak (Nunavik). Along with Madeline Ivalu, she co-directed the feature film “Before Tomorrow”, presented at the Sundance and the Toronto Film Festival and winner of many awards.

The chosen videos, presented as part of the series Women of the Arctic, share the quality of being daring: they reflect a need to speak up and an original use of the media, anchored in Inuit women’s culture and land.

Marie-Hélène Cousineau is a producer and film director. Since 1991, she has been working with inuit collaborators in Igloolik, (Nunavut) Puvirnituq and Inukjuak (Nunavik). Along with Madeline Ivalu, she co-directed the feature film “Le jour avant le lendemain”, presented at the sundance Film Festival and winner of many awards.

Aqtuqsi and Unikausiq by Mary Kunuk (Igloolik) are short animations that have been produced fifteen years ago. Back then the technology was not what it is today but it already allowed a freedom of production and an independence that we now take for granted. As Mary says,“ To record the songs and stories of my childhood is a way to preserve them”. In fact, Mary Kunuk, who has also drawn the graphics of these two films, was also showing the way for Inuit artists to experiment with new technologies that allowed them to keep full control over their own voices.

Through Si le temps le permet, Elisapie Isaac (Salluit) speaks up from a personnel and autobiographical perspective. However, (and this is what makes the piece so strong), this perspective is anchored in a wider social and political context. Elisapie Isaacs is now a renowned Québécois personality, but she dared to speak up through this piece long before she could enjoy the support she now knows.

Annie Pootoogook, by Marcia Connely, is evidently the result of an interesting artistic collaboration. A renowned artist from Cape Dorset, Pootoogook has contributed to the renewal of Inuit printmaking, not only in its form but also in its content. Her presence in the film allows us to see that she had fun with Connely and amused herself with the video media (for example when she chooses to speak directly to the camera), discovering without a doubt a new tool of expression. The film is extremely revealing and sheds a light on Annie Pootoogook’s life context and artistic process. (http://sitemedia.ca/films/annie-pootoogook/)

Lumaajuuq et Inuit High Kick by Alethea Arnaquq-Baril, testify of the director’s  will and determination to seize new means of production and to share cultural content; the pride and command in which she does so suggest that we are witnessing the beginnings of a remarkable film maker’s carreer.

To continue your exploration of Inuit video please visit www.isuma.tv 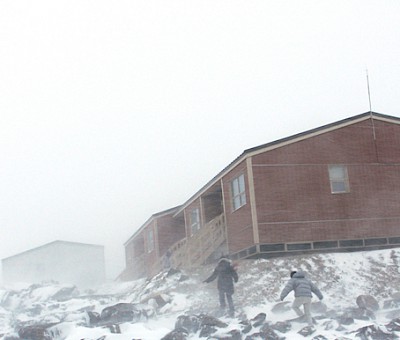