from December 22nd to January 31st

During the Christmas holidays, while La Centrale will be closed, (December 22nd - January 31st), the many passer-bys of boul. Saint-Laurent will encounter Jali, an in situ piece by Montreal artist Geneviève Rocher. The artist has covered the vitrine of La Centrale with Japanese paper onto which she has collaged oval shapes made of Christmas wrapping paper. She then created apertures of various small shapes: dots, bars and curves. We are then faced with a vitrine both obstructed and open, presenting itself as opposed to serving as display. The oval shapes reference a Sonia Delaunay gouache from 1928. Rocher developed the network of apertures while revisiting the sentiment that traversed her, during her travel in India, when she encountered the open latticed surface of  “jalis” behind which she imagined women confined in domestic environments. Geneviève Rocher proposes a piece where she manipulates a point of divide; a fringe, where effects of day and effects of night, inside and outside, art and ornamentation, Occident and Orient, coexist not only without excluding each other, but are positioned as to each claim the status of the other.

The artist would like to thank all those who have contributed to the piece by donating paper. 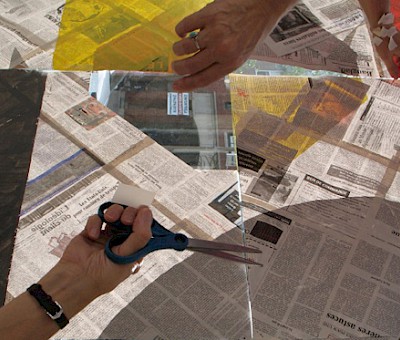