as part of the series WOMEN OF THE ARCTIC

La Centrale is proud to present the second edition of Women of the Arctic, a series of exhibitions and events presenting the work of Inuit women artists from Nunavik and Nunavut. This second edition of a three-part series has been made possible through the generous support of Dorset Fine Arts and Feheley Fine Arts in Toronto.

The drawings in this exhibition have not been chosen to articulate a common theme in the work of these two artists, but rather to create an assemblage of images that traces, through its rhythm, atmosphere, details, and movement, the fictive portrait of a territory.

The two artists share in the unusual fullness of their gaze on everyday life. This vivid scrutiny is turned upon the land’s jutting reliefs, the scattered objects, the creatures and the beliefs that populate the terrain. It lingers on the relations between beings, on crossing paths, on time, while being subjected to the singular imaginary of each artist: Shuvinai Ashoona’s is violent, colorful, and provocative while Ningeokuluk Teevee’s is tender, direct, and witty.

The work gathered here portrays daily life as luminous fiction, all at once fabulous, banal, and impossible. The images carry us through a land made of beauty, clarity, and danger. A danger that could just be passing by: through the creature of a legend, through the sad look in two children’s eyes, or through a few men armed with sticks.

Sky Ecchymosis is one of those twilight skies that fill us with wonder with its neon pinks and unnatural blues. A condensed image that dazzles us more than daylight but also signals the arrival of nightfall. A moment of extreme lucidity in which wonder gives way to a sense of vulnerability.

BIOS
Ningeokuluk Teevee developed her art practice among the community of artists at Kingait Studio in Cape Dorset, where she continues to work as one of the most prolific members of the cooperative. Her first solo show was held at Feheley Fine Arts in 2009. Since then, her work has been seen in many exhibitions across Canada including Uuturautiit; Cape Dorset Celebrates Fifty Years of Printmaking, at The National Gallery in Ottawa (2009), and Paralleling the Permanent Collection: Contemporary Art by Inuit and First Nations Artists, at the Art Gallery of Ontario in Toronto (2011). Her work is presently featured in New Art from Cape Dorset, at the Winnipeg Art Gallery, and in Women in Charge, at the L. Pigorini National Museum in Rome.
In 2009, Teevee wrote and illustrated Alego, her first children’s book, which was nominated for the 2009 Governor General's Literary Award in the category of Children's Literature - Illustration.

Shuvinai Ashoona works primarily in drawing and printmaking. Her art practice began and evolved at the Kingait studio in Cape Dorset where she continues to work and to sustain a prolific art practice. Her work has been shown at Art Basel Miami as well as in many exhibitions across Canada and abroad. Among others: Shuvinai Ashoona Drawings, at the Carleton University Art Gallery; Uuturautiit; Cape Dorset Celebrates Fifty Years of Printmaking, at The National Gallery in Ottawa (2009); Earth and Sky (a collaboration with John Noesthedan), at Nuit Blanche in Toronto (2008); and, Noise Ghost: Shuvinai Ashoona and Shary Boyle, at the Justina M. Barnicke Gallery in Toronto (2009). Her work is presently featured in Women in Charge, at the L. Pigorini National Museum in Rome. Next spring her work will be featured in Oh, Canada, at MASS MoCA, Massachusetts, and in the 18th Biennale of Sydney.

Marcia Connolly is an award-winning filmmaker, cinematographer and video-journalist.

The curator would like to thank the l’Araignée collective, Minnie Napartuk, Bill Ritchie and Libby Shea.
This project was made possible with the help of Dorset Fine Arts, Feheley Fine Arts, First air, Government of Nunavut et Avataq Cultural Institute.

Women of the Artic's first edition 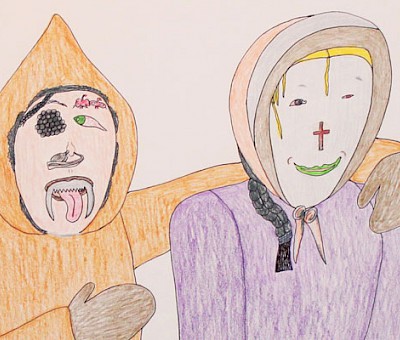