Cougarliscious Point Final celebrates the end of a durational performance by Dayna McLeod in which she wore animal print clothing, 24/7 for an entire year. This closing "finissage" will feature two works: a re-enactment of Yoko Ono’s Cut Piece, and a photobooth in which participants trade their image for a piece of clothing from Dayna’s extensive cougar wardrobe.

Cougar For a Year is/was a yearlong, durational performance piece that I began on June 1st, 2012 in which I dress in nothing but animal print clothing, 24/7 to challenge the stereotype of the ‘cougar,’ a woman over 40 who aggressively demonstrates her (hetero)sexuality. This project investigates and lives the stereotypes of the ‘cougar’ by wearing her uniform, which I have named as animal print for the sake of this project, and is documented online at www.CougarThis.com.

Re-enactment of Yoko Ono’s Cut Piece
Seated on a platform, the attending public is invited to cut off pieces of my clothing with scissors provided. When Yoko Ono first performed this work in 1964, it took roughly nine minutes for her clothes to be cut off. I am interested in how this reenactment is in dialogue with Ono’s original performance and subsequent restagings of this work and how this is effected by the context of Cougar for a Year.

Cougar Photobooth
In collaboration with Nikol Mikus & Alyson Wishnousky
Dress up in leopard, zebra, snakeskin or tiger clothes from my wardrobe over the last year! If you would like to keep something, all I ask in return is your image with the item. These portraits will be taken and styled by the incredibly talented duo, Nikol Mikus & Alyson Wishnousky. Limit one piece per person.
http://www.nikolmikus.com/ 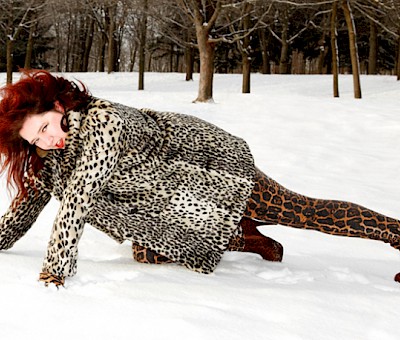