Like the universe, the realm of cultural production consists mostly of dark energy and matter. These invisible masses and movements form from spontaneous, amateurish, autonomous, activist, self- organized, collective practices that play an important part for feminist cultural work. This is also a matter of the unpaid or underpaid labor of those who deliberately shun visibility or have no choice but to remain invisible. It is the invisible dark matter that holds the cultural sector together while the dark energy bears the possibility to expand established notions of art making and challenge its exploitative modes of production.

DARK ENERGY. Feminist Organizing, Working Collectively explores feminist forms of organization and knowledge production in the cultural sector. It gives center stage to the visual, material and performative characteristics of feminist collaborative practices. It asks how these forms of organization and production are influenced by their general economic setup and what begins to sway politically in this context. In what ways does dark energy permeate the cultural sector? Which forms of creative dark matter and knowledge can be practiced, produced, and disseminated when, where, and how?

The exhibition reflects multiple challenges that have been faced by women artists and how they have changed over the years. They point to the fact that the roles of womxn within the cultural sector have expanded—more women students enter art universities, to name but one example. Nonetheless, multiple forms of discrimination and exclusion persist until today. “Free labour and rampant exploitation are the invisible dark matter that keeps the culture sector going,” the artist Hito Steyerl pointed out in 2012. This labor is largely performed by artists and cultural workers who are made vulnerable because of their gender, race, ethnicity, class, migratory background, and/or status, for instance. As a reaction, many artists have raised, time and again, not only issues of sexism, but also of racism, classism, trans- and homophobia, among others, through their art and activist work —and consequently brought about an ongoing critical debate of feminist art practices. What does it mean, then, to curate an exhibition or run feminist art organizations that attempt to challenge and undermine dominant structures, modes of production, and forms of art and knowledge? What acts of self-exploitation may be involved? What can be learnt and unlearnt from historical examples? How can creative dark matter and knowledge be made visible without playing into cognitive capitalism’s hands? Or, is it rather about keeping them invisible, searching for ways to resist? Above all, which forms of knowledge are at stake here, and which power relations do they address?

The exhibition brings together a diverse range of efforts that tackle these questions in different contexts and times. Through the work of the participating artists, archivists, designers, and activists —in their shifting roles as founders, archival caretakers, and/or researchers, as curators and organizers or engaged participants—the exhibition provides insights into the forces that collide with(in) art institutions and organizations. 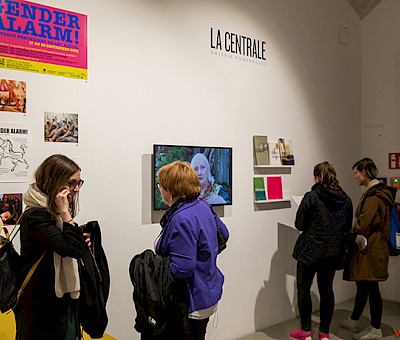