In an imagined space, a series of self-consciously constructed identities come to embody an invested trace - of lost love, lost words, of lost or stolen objects. Lost and yet, the trace of what remains sticks in the memory, and to the body. And in this "no-man’s land" we find four women - charting four distinct paths on land in-between multiple defined worlds.

Curator Victoria Stanton
Victoria Stanton (Montreal) is a performance artist, video-maker, and published author. Investing a performative presence within multiple spaces/times, her work investigates the ability (and the desire) to hold a space, to appropriate and disrupt the quotidian, to court risk & vulnerability. As an artist curating time-based work she is drawn to practices that embody some form of personal challenge as transformative revelation. She has presented performances, interventions, exhibitions, and videos in Canada, the U.S., Europe, the U.K., Australia and Japan. www.bankofvictoria.com

Three Minute Miracle: Tracking the Wolf
Amalie Atkins
Within the context of a fictional world, Amalie’s work investigates aspects of loss, isolation, Transformation, and ritual to create a mythology both awkward and spectacular. Over the past few years she has been working in film, performance, fibres and photography, using these mediums in ways that at once inform one another and contribute to the creation of these fantastical environments. Fusing these separate entities together, Imagined Spaces, Lost Objects marks the first appearance of her cinematic work in the context of performance. Initially made as a 16mm film, for this event, Three Minute Miracle will be presented as a live performance, incorporating a live audio component and additional performative elements that tie into key events and objects in the film.

Amalie Atkins (Saskatoon, SK) is a multidisciplinary artist whose work hop-scotches from filmmaking to fabric-based sculpture to performance. Her work is inspired by the repetitive tasks related to her textiles work, such as cutting and stitching, during which subconscious ideas emerge into stories and eventually story lines. Having studied at the Alberta College of Art and Design, Atkins currently lives and works in Saskatoon. Her work has been exhibited across Canada, the US, and in 2009 debuted in New York City and Berlin, Germany.
Series of performance actions designed to break down social norms around touch, gestures of care, vulnerability and public intimacy. Using hand washing and then massage of the hands of the audience participants, Julianna offers them an opportunity to use the time spent engaged in the performance to metaphorically cleanse or alleviate tensions they may have in relation to their identities. Throughout the massaging of the hands, she also sings to the person receiving the massage, further heightening the intimacy of the gesture and interaction between us.
www.skewgallery.com/atkins.htm

Antidote
Julianna Barabas
Series of performance actions designed to break down social norms around touch, gestures of care, vulnerability and public intimacy. Using hand washing and then massage of the hands of the audience participants, Julianna offers them an opportunity to use the time spent engaged in the performance to metaphorically cleanse or alleviate tensions they may have in relation to their identities. Throughout the massaging of the hands, she also sings to the person receiving the massage, further heightening the intimacy of the gesture and interaction between us.

Julianna Barabas (Calgary, AB) is a performance and video artist based in western Canada. Her work explores embodied experiences of gender, identity and spirituality, as informed by feminist concerns and theory. A central theme in her work is the dynamic of exchange between performer and audience and the politics of care and attention it implies. Recent works include: Gorilla Jane, a feminist tour of the exhibition PAINT at the Vancouver Art Gallery (2006), Antidote, a ritual hand washing first shown at Latitude 53 Visual Contemporary Culture as part of Visualeyez, then again at the ‘Bathhouse’ as part of Exposure Festival (2008), and Reframed Refrain, a live nude interaction and extension of the Alberta Art Gallery’s Leaving Olympia exhibition detailing the use of the nude in contemporary art. Her video works have been shown at the Victoria International Film Festival and Out on Screen Queer Film and Video Festival in Vancouver. Her most extensive project is an ongoing performance called ‘seamline’. Beginning in May of 2003, she invited audiences to witness her process of having a line tattooed around the full lateral circumference of her body. These public events continued once a month for a year, evolving into a truly contemporary ritual. Since the physical completion of the work, Barabas has positioned the ongoing conversations that result from living with a full body tattoo as a life time performance, cataloguing the interactions which will be released in an exhibition catalogue/artist’s book in 2010. Barabas received a Bachelor of Political Science from the University of Western Ontario in 1991 and Bachelor of Media Arts from Emily Carr Institute in 2006. http://seamline.blogspot.com

Eat Your Enemy #3 I am
the Coca-Cola of art
Janine Eisenäecher
In her solo performance-series Eat Your Enemy, Janine Eisenaecher basically works with the Brazilian cultural concept of Antropofagia (cannibalism) and by that explores its potential of being an alternative subversive strategy. Focusing on processes of incorporation and transformation, the performance artist discusses matters of identity in relation to work and gender-specific questions, the (post)colonial discourse of “the other”, and the economic structures in the field of artistic work itself. By using text, objects, body and sound in a ritualistic structure, Eisenaecher each time undertakes a new self-experiment of an imaginary voyage to overcome felt dependencies and to follow her own desires. The starting point for Eat Your Enemy #3 is a quote by the female performance art-legend Marina Abramovic, mentioned in the German art magazine monopol: “I am the Coca-Cola of art.” For Eisenaecher researches on and works with Coca-Cola as material in her performance work since 2007, this claim is the perfect basis for a new anthropophagic investigation… this time Eisenaecher incorporates Abramovic and transforms into the Coca-Cola of Art herself. The traces of the live performance remain in the gallery space as ongoing installation.

Janine Eisenäecher (Berlin, Germany) works in various constellations as performance artist, mostly on serial performance art projects on certain topics using body, objects, text, sound and video. She develops concepts for group/duo/solo performances and site-specific interventions in public space. Eisenäecher is a founding member of (e)at_work, a Berlin-based artistic and scientific production platform that explores object and activity related interview methods for the interaction with audiences in public space and within the art context. She is also a founding member of the performance network Emanuelle, founded as Berlin n@work. Eisenäecher’s artistic practice includes curatorial and organizational work for Performer Stammtisch, the network for professional performance artists and monthly performance art and live art event in Berlin. Herein, she investigates different forms of writing and talking about performance art. She studied theatre, comparative literature and philosophy at Freie Universität Berlin.

Madame Blanche
Laura Margita
Madame Blanche Hears Your Confessions was a serious, heartfelt performance with all the things that make a performance professional like invitations, assistants, a videographer, a sculpture technician and a location in an artist run centre with a highly educated audience. The audience/participants were horrified, amused and afraid for me and the documentation of the events is one of the most embarrassing and distressing displays of loss of control that I have ever seen recorded on video. I may have lost the tape on purpose or not. I will try to find it or recreate it for this performance and take what I can learn from it in the service of my search for

1. meaning
2. self awareness
3. forgiveness
4. love
5. power
6. artistic expression for a community of people that is
a. beautiful
b. nourishing
c. scary
d. sad
e. funny

Laura Margita (Saskatoon, SK) began her artistic career in Ottawa receiving a BFA from the University of Ottawa in 1991. She began her studio practice at the EBA in visual and new media projects. While in Ottawa, Laura worked as a Sculpture technician, teaching assistant and building manager at the University of Ottawa Visual Art Department, founded the Enriched Bread Artists Coop, taught visual art in the Light house program at the Ottawa Board of Education, curated at Creative Outlet/Gallery CO, was the administrator at SAW Gallery for seven years, and then taught as a teacher and outreach coordinator at the Ottawa School of Art. She is currently serving in Saskatoon as the Executive Director at PAVED Arts. In her studio practice Laura works with fuzzy fabric, both heavy and light objects, paint, media and performance. She is a community activist fighting for social justice, nudity and culture for all with critical feedback. Performances include: Double Date, The Longest Noodle in the World, Tossed Salad and Madame Blanche. 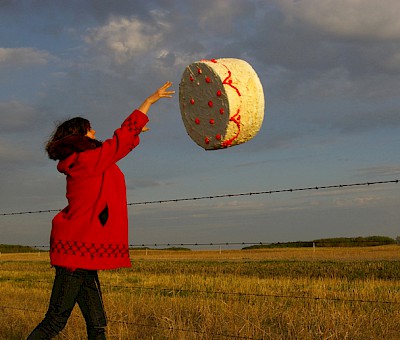