As part of international women's day

Since 1911, International Women's Day has recognize the economic, political and social achievements of women past, present and future. La Centrale Galerie Powerhouse, The Montreal Underground Film Festival (M.U.F.F.) and Blue Sunshine are teaming up to celebrate this 100th anniversary through a selection of fun-filled videos made by and/or featuring smart, bold, excentric, crafty women for a one night only screening, talk and dance party !

SHORTS
(this list is alphabetical, and not necessarily in order of presentation)

Doll-Like
Alexis Baran / 3:00 / no dialogue / Canada (BC) / 2005
A plasticised girl treats Barbie dolls like one might treat certain types of drugs.

Possibly in Michigan
Cecelia Condit / 1983 / 11:40 / with dialogue (EN) / Etats-Unis / 1983
An operatic fairy tale of cannibalism, desire and dread in Middle America in which two women with a penchant for "violence and perfume" take revenge on their animal-masked male persecutor.

Strip Show
Jesika Joy / 1:00 / no dialogue / Canada (ON) / 2005
A choreographed strip tease to Madonna's Like a Virgin. By interrupting the dance to binge eat cupcakes, the position of 'desired female object' is exposed as little more than a fragile performance.

Music Machines
Jonas Meier / 4:00 / no dialogue / Suisse / 2008 / Zweihundfilm
Sunday afternooon, 3 o'clock. What, at this time, could be more intimate, than eating a strawberry tart.

"Two questions: (1) Why are most films shown in the gallery or museum context so expensive and so pukoid? (2) In the shadow of the Hollywood sign, what is the difference between an appropriation and a remake?" (Bruce Hainsley, Artforum)

Martha Coolidge's Valley Girl captured an immortalized the 80s obsession with suburban LA mall slang, and its legacy remains so potent that 20 years later, artist Michelle O'Marah and her friends decided to revisit it with their own low budget remake. Every detail is lovingly (re) created, from the costumes to the soundtrack! See a nightclub made out of painted construction paper! See the sketchiest use of a green screen ever! See Peter Case of the Plimsouls played by a woman in a beret! This sounds like ironic hipster hell. it's not. The sincererity of the retelling is apparent, and the performances by a largely unprofessional (and middle-aged) cast don't just mimic their 1980s counterparts, they imbue them with a character that combines the most memorable aspects of the originals with a clumsy charm all their own. O'Marah's film started as an art project aimed at a gallery context, as a means of exploring the type of pleasure we get from supposedly vacuous films. But over time it has gained a reputation as a stand-alone film that simultaneously questions the complacency spurred on by formulaic romantic comedy filmmaking and conveys its own kind of pleasure triggers, all of which revel in the awkwardness of real romance. The film is not available to the general public, making this an exceptionally rare chance to see it. (Kier-La Janisse)

About Michele O’Marah:
For more than a decade, O'Marah has been working in the geographic and economic shadows of Hollywood and has lavished attention on many of its forgotten or soon-to-be-forgotten products and by-products. Her first major production was Valley Girl, 2002, a three-years-in-the-making, nearly shot-for-shot re-creation of Martha Coolidge's 1983 cult film, in which two fashion-forward teenage girls from the sunny San Fernando Valley follow a pair of streetwise punks across a cultural divide and into the bowels of Hollywood in order to find themselves--and perhaps love. Valley Girl was followed by the three-channel video Peacehead, 2004, which constructs its narrative from fragments of 1970s paranoid political thrillers; Faustus's Children, 2006, a video collaboration with David Jones (script and sound) and Tim Jackson (special effects) that borrows freely from Hitchcock's Rope (1948), Roger Kumble's Cruel Intentions (1999), and Donna Tartt's novel The Secret History (1992), among other tales of the privileged class's dark side; and How Goes It with the Black Movement?, 2007, a video that restages a bristly interview of Black Panther Huey P. Newton by conservative mouthpiece William F. Buckley Jr.
(Michael Ned Holte) 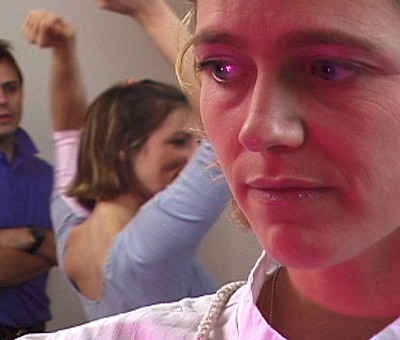