The space between the mountains of my childhood and Montreal, is packed with unresolved, lumpy matter - issues of sexuality, death and religion in particular. Don’t be surprised if in my position, these are ongoing. Lesbomontagnarde, mountainqueer, degendered, transnational chamois: I make suggestions, of what you sometimes may want to call me.

The discourse that insults our ability to take people for what they are, with all that they have lived, their values, as different as they are - I say no! Enough! Stop! Basta! Enough! Those damn speeches I hear everywhere in the media, in discussions daily. I cannot get stuck with all that and then go draw a pretty snowcovered landscape (I love snowy landscapes, I don’t have snobby attitudes). So yes, scoop: a social context, it changes. And history, it is written. After that, the question is always who holds the pencil. Anyway, there is always someone to worry about when everything going (badly) ends. We feel it. It is a little tense. It is polarized. It touts an "us" and "them" identity, from exclusive charters galore (especially without a piece of cloth), to borders, quotas, forms with two boxes - no gender choice. You will understand, this type of speech (yes, those who use the big words such as Eurocentric, neo-colonial, patriarchal heterocentric, white), I want to bite into it.

Transnational mountain animal adapted to an urban environment, I consider myself an ally artist. Through drawing, video and installation, I create stories from parts of my life, "official" history and latest gossip of a neighbour. Because one must make one's voice heard - mine is queer - in a bit of a reactionary context, in which I bathe with my friend - es. My stories, more or less crazy, have mainly been seen in galleries and video festivals in Montreal and led me to perform with a rag puppet in New York, Geneva, Toronto through out of the way mountain valleys in France and Quebec. 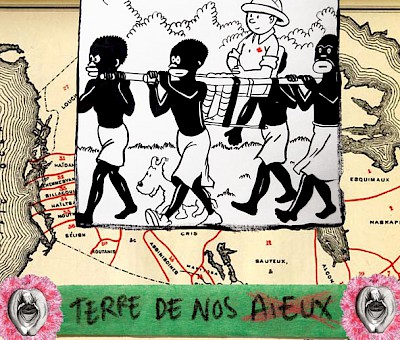