As part of the festival VIVA! ART ACTION

TERESA MARÍA DÍAZ NERIO (Dom. Rep.)
We regretfully announce that Teresa María Díaz Nerio will not be coming to VIVA! to perform, as the artist was denied the necessary visa for her temporary stay in Canada. We deplore her absence and will provide her with space for a presentation via Skype during the conference Feminist Issues Through Performance, where she will have the opportunity to introduce her practice and interact with the other invited speakers. VIVA! believes in the free circulation of international artists and hopes to not have to manage the detention of invited artist at the border in the future.

Teresa María Díaz Nerio is a Dominican visual and performance artist and researcher living between Amsterdam and Dominican Republic. She graduated as a Bachelor in Fine Arts from the Gerrit Rietveld Academie (2007) and received her Master in Fine Arts from the Dutch Art Institute (2009). She does research which is often focused on subjects informed by the history of colonial and neocolonial invasions in the Global South, challenging the hegemonic Eurocentric and US centric notions of who is who and what is what.

The performance “Hommage à Sara Bartman” (2007) elucidates the life, death and afterlife of a South African Khoisan woman. Sara Bartman was exhibited in England and Paris at the beginning of the 19th century as part of a popular entertainment industry of freak shows, menageries, theatres and pleasure gardens. Biologists were fascinated by Khoisan women’s genitalia, “tablier” or elongated labia, which accompany the large buttocks or steatopygia. This was indeed one of the reasons why Sara Bartman was kept as an object at the Musée de l’Homme in Paris under the iconic name “Hottentot Venus.” Her skeleton, brain and genitalia were exposed with a cast of her body until the 1970’s, when feminists’ protests against her display succeeded. In 1995, Nelson Mandela requested the repatriation of her remains, which only found peace in 2003.

Victoria Stanton (Montreal, Canada) is an interdisciplinary artist working with live action, human interaction, video, film, photo, drawing, and writing. While the outward results of her practice may manifest in a multiplicity of forms, performance is the unifying central focus and invariable core of her research. Stanton’s time-based work includes performance for stage, performance for the camera, actions in public spaces and one-on-one encounters in intimate contexts. Whether participatory, durational, task-based or audio-visual, her work is an investigation into the ability (and the desire) to hold a space, to appropriate and disrupt the quotidian, to create spontaneous intimacy, to tread vulnerability.

Stanton has presented her work in Canada, the U.S., Europe, the U.K., Australia, Japan and Mexico. Her creative and critical writings have been published in Canadian and American anthologies and art/literary/lifestyle magazines. Her first book “Impure, Reinventing the Word - an examination of the practice of spoken word” was published by conundrum press in October 2001 (co-authored with Vincent Tinguely). Stanton is currently working on her second book, this time with the TouVA collective (comprised of Anne Bérubé, Sylvie Tourangeau and Stanton), a critical work developing salient notions on how performance is practiced and on the question of ‘the performative.’

Interdisciplinary artist Celeste Marie Welch works in sculpture, photography, installation, video, sound and performance. Using different forms of craft such as crotchet, knitting and restoration of objects, her sculptures function as props in pre-choreographed performances that are often accompanied by a video projection. Her time-based surrealist works address multiple queer personas that construct narratives through dream imagery and dialogue. Her work remixes the accoutrements of gender oppression and returns them as tools for play when performing the body.

Presented at VIVA!, “Fotos y Recuerdos” will be derived from her research about Tejano culture and her relationship to Mexican American culture as a Mexican American Queer. The performance purposely shares its title with a song by Selena Quintanilla-Pérez, the character inspiration for this performance. 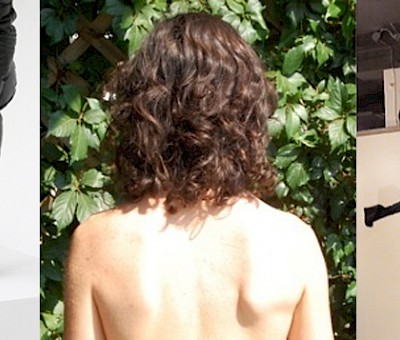